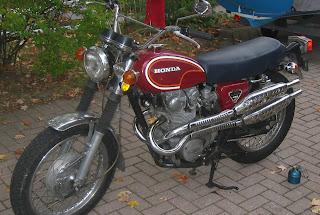 What is a scrambler motorcycle? Back in the fifties, there was a type of competition called a scramble in England. Typical of pure English sports, there were few rules - go from here to there as fast as you can, and much of the way was cross country. The word scramble itself means a kind of undignified running and climbing on all fours. Later on, the sport split into trials riding where you could go slow but lost points for putting your feet down. Or motocross, where you went fast and had laps to do on a specified track. In the USA there were desert scrambles in California, where street bikes were modified to race off road. This was just before specialized dirt bikes began to be sold.

In the mid sixties the "street scrambler" was invented, which was mostly a marketing concept: a street bike that was modified to look like it could go off road. This was a precursor of the modern SUV. The "Street Scrambler" generally had a smaller gas tank than the street bike. I have no idea why, except that in competition you usually have a tank just big enough to finish the race. Maybe the desert scrambles were short. Also, there were high exhaust pipes. The reasoning behind those was the fact that if you crossed a stream and the engine stalled, you might get mud or water into the exhaust pipe if it was too low. Then there were the wider handlebars, with a crossbar to reinforce them in case of a crash. The front brake was a drum, not a disk, because off-road people in the seventies didn't trust disk brakes. The fenders were generally shorter, the headlight smaller, but otherwise there were no serious changes that would make these real off road bikes.

The styling changes that made a bike a scrambler were inconvenient for the road - the high pipes got in the way of the passengers feet and pumped exhaust fumes up where the passenger could complain about it. The smaller tank needed filling often.

But the big attraction was that with a street scrambler, you imagined that you could keep on going even if the road stopped. That thrill seems to never get old, and today you can get bikes that are better both on and off the road than the street scramblers. An example is the Kawasaki KLR650.

My 1972 Honda CL450 was a classic street scrambler. Honda kept producing them until 1974. In 1975 the scramblers disappeared without fanfare for thirty years. Then in 2005 Triumph introduced a retro street scrambler based on their new Bonneville bikes. I was thinking of buying one, but in the end I opted for a cruiser styled bike with the low seat, low floorboards, saddlebags and and windshield. For the same price it seemed like a much better deal. And I knew there was almost no chance of me ever going off road even if I had a scrambler. There is really only about one place in Ontario that you can take a street bike off road, and that's down near Turkey Point. Everywhere else, it's illegal now. All because some kid crashed while riding on a vacant lot, then the parents sued the owner, and of course everything changed.

I also posted a followup blog on the 2009 Triumph scrambler
http://lostmotorcycles.blogspot.com/2009/09/triumph-street-scrambler.html