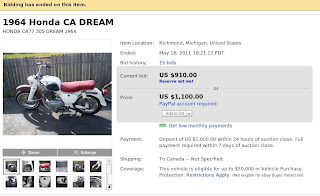 I often get emails asking about the value of old Honda CD175s. It is a difficult question to answer, so I will begin with how I much I paid (and why) for my first restoration project honda CD175 in 2001.

In 2001 I was at the Paris (Ontario) Vintage motorcycle show. I had never tried to restore an old motorcycle up to that time, but I was thinking that since I had retired a few years ago, and was looking for something interesting to do, that an old motorcycle might be fun to restore and ride. While I was walking around to displays of old bikes, I met a friend who had a few old bikes she was working on, and she said one of them was a Honda 175. I immediately knew what kind of bike I was looking for, because my first bike was a Honda 175. I could already see myself riding around on a bike exactly like my first one that I had sold in 1972.

Honda had made many different 175 models. Mine, which I bought in Africa, was an "international" specification CD175 K3 model with the solo seat configuration. The first place I looked was eBay, and coincidentally, on the first day I looked, I saw the exact model I wanted, in running condition. Although it was red, (not blue like my first bike), it looked exactly the same otherwise, and according to the blurb, it had been shipped to Canada many years ago from Kenya. Since then I have never seen another bike like it on eBay or anywhere else. It was fate.

I don't want to turn this into an eBay rant, but I had no experience with eBay auctions, and I wanted this particular bike real bad. You may already realize that this was not going to result in a low price for me, and it didn't. But I wasn't a complete fool. So I set my maximum price at $2000, which was about double what most other Honda 175's of that time were selling for, although I noticed one earlier 175 auction had apparently resulted in a sale price of over $3000. But that alleged $3000 bike was in amazingly good condition. I put in my maximum bid early, believing eBay's story that this would be kept secret from other buyers. Having no experience at eBay, I knew nothing about "sniping", and "shill bidders". As the closing time drew near, another bidder pushed the auction price up to my maximum bid, bidding in small increments, and stopping when my limit was reached. So I did a little more research and discovered how to "snipe" this type of bidder at an auction, which is the only way to win against this type of incremental bidding. I had to go a little over my maximum limit, but I got the bike for $2050. I was prepared to pay up to $2500, but I think in retrospect, it was probably worth about half of that in an open auction. I picked up the bike in person, and paid cash after a test drive and verifying that the seller had advertised the bike honestly.

Now here is an email I received recently, and my answer to explain the price of an old Honda similar to my CD175, remembering that it is not a highly sought after classic like the Vincent or Brough Superior.

> Hello my name is Chelsea and I have a cousin that has a 1963 Honda Benly
> 161cc motorcycle. We are having a very hard time trying to find the value of this
> bike. Is there any way you can help me with this? Thanks for your time.

Response from "The Lost Motorcyclist":

Your problem is typical, it is indeed very difficult to find the price of an old Japanese motorcycle.

What you are selling is not really a motor vehicle, it is too old to be simply another motorcycle to learn how to ride on, and to ride back and forth to school. Instead, think of it as rare collectors item. Something that has mainly historical or nostalgic value.

Prices of collector items can vary tremendously, based partly on their condition. This is what I would want to know, if I was interested in buying it. Is it complete? If it is missing parts, which parts? Some parts hard to find, some are they easy to replace.
Is it running? If not, is it because the engine is frozen? As a buyer, I am also interested in your location: what country are you in? What city are you near?

The top price can be asked for a motorcycle being sold by the original owner (or their family), which has always been stored indoors, has never been disassembled or repainted or crashed. And has the original bill of sale, owners manual and and tool kit.

Lowest price would be for boxes of rusty broken parts of unknown origin.

Prices are more often determined by the buyers, not the condition of the bike or the price of the seller. When buyers are scarce, the price will be low. If there is more than one interested buyer, the price will be as high as the buyers are willing to go. And it is absolutely impossible to say why a buyer may want it. Some buyers may want it even though
they do not understand what they are buying. Other buyers might be very knowledgeable collectors.

eBay is a great place to sell something that you do not know the value of. Also, you can look for similar items on eBay to get an idea of what yours may be worth. Here is an auction for a 1964 Honda Dream.

Also, pictures of the bike really help the buyer decide if they want it.

Picture: The closing eBay auction price of the Honda 160 mentioned above. (bike not sold)
Copyright the Lost Motorcyclist