What Can We Learn From Monty Hall? 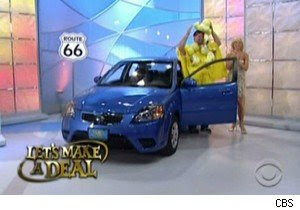 There is game show called "Let's Make a Deal". Although this show has no pretensions of intellectualism, it has created a logical puzzle that fools nearly everybody. I heard about this puzzle on TV a few days ago, where a university professor presented the problem, and gave the correct answer, but he did not have time to explain fully. I was sure he was wrong, and continued to try to figure it out most of the night. By the morning, I was even more convinced he was wrong, so I decided to look it up on Wikipedia. You can find it in this entry "The Monty Hall Problem."

This entry goes through several different mathematical proofs, only a few of which I understood. And now I realize I was wrong. I had thought it didn't matter, but when Monty offers to let you change to a different door, you should always take the offer.

But why do well educated, mathematically trained humans almost always get fooled by this problem, when apparently even a pigeon can typically figure it out with time? In my opinion, the deceptive part is that Monty Hall is consciously trying to help you, while every normal human instinct would be to fear that he is trying to beat you.

Here is the problem. You have three doors. One door has a car, the other doors have gag gifts. First you are asked to choose a door, and you can win what is behind the door you choose. Monty then opens a door with a gag gift, and offers you the choice of switching to the remaining (still closed) door. Should you switch or not?

Most people (including mathematical wizzes and "The Lost Motorcyclist") instinctively figure that the odds of winning the car are exactly the same, whether you switch or not. Au contraire, your odds of winning are 66% if you switch, and 33% if you don't switch.

This is all explained, with several different proofs in the wikipedia entry. If you wish to figure it out for yourself, take a few days before continuing to look at the answer.

Now are you sure it doesn't matter whether you switch or not? This is an explanation of why you should switch in my own words. You have a 33% chance of winning when you pick your door, but that leaves Monty with a 66% chance of getting the car behind one of his two doors. Then Monty gets a chance to look behind the other two doors, and he eliminates the gag gift. Then he offers you the chance to switch with his best door, even though it contains a car 2/3 of the time. That's why you should take it.

What I think we should learn from Monty Hall is that strangers are not always out to win. In some extremely rare situations, they want you to win. But it's probably pretty rare, so most of the time you'd still be better off being suspicious of "generous offers". And that includes leasing a car vs. buying, in case you don't win the car on "Let's Make a Deal".
Copyright the Lost Motorcyclist