This winter, the lake in Victoria Park is being dug out for cleaning and reshaping.

Mary Ann and I often walk downtown, and on the way we usually stop to look at the progress of this  project, which is quite a spectacle. 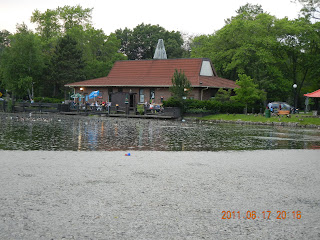 Last year, Victoria park lake was the dirtiest I ever remember.  It smelled bad and was covered with scum and muck.  I have a picture of the Boathouse, a local blues hotspot, which has a deck right on the lake.  When the lake is clean, this boosts Kitchener's appeal, even if you are not sitting on the deck enjoying  beer, but just walking by.  But when the lake looks like an open sewer, it makes the city look kind of pathetic.

In the picture, you can see the layer of scum last June, but you need to smell it to know what it is. The link above is to a video of the work being done, in the local newspaper website.  Our newspaper is now known as "The Record" and apparently not the "Kitchener Waterloo Record".
Copyright the Lost Motorcyclist