A Subliminal Message in "Bruce Almighty" 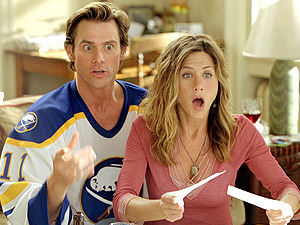 Bruce Almighty appeared on basic cable last night.  This is not a review of the movie, it is more of a lesson in spotting hidden messages after you have seen the movie.  So spoilers may be coming.

Obviously this movie is somewhat controversial.  Bruce (Jim Carrey) is given the power of God, to see if he can do a better job.  Although it is a good comedy sketch, it also is playing with subjects where people are very divided in their opinions.  On one hand, you have religious extremists who believe that God exists, listens to prayers, and sends people to hell after their death.  On the other, are people who believe God is an invention to help some people to manipulate others.

With a controversial topic such as this, it is impossible to simply plow through the jokes and pratfalls without carrying some message about the nature of God, and whether He exists or not.  For example, God is portrayed as a black man (Morgan Freeman).  Already, this is reinforcing some ideas, and challenging others.  For example, many southern Baptist extremists believe God is white, to support their racist ideas.  This film portrays Him as black to skewer their fantasies.  But what about women who have been kept in their place for centuries with the "truth" that God is a man and women are not in the image of God?  Women believers will have to wait a bit longer I guess, to get a movie made for them.

Aside from the obvious statements made in the movie, there are hidden statements.  The controversy I am thinking about is the "Power of Prayer".  Many people think praying to God will give them some advantage in life, such as money or friendship.  So in this movie, Bruce is given the chance to answer prayers, and in dealing with prayer, we supposedly learn something about why God may or may not answer prayers.

The ground rules for Bruce are simple, that he only controls Buffalo New York (not the whole universe), and that he, like God, cannot alter "free will".  But even these ground rules, so simple in appearance, are loaded with hidden messages.  Let's look at the message of a regional God first. If a God can only answer prayers for Buffalo, then of course the Buffalo Sabres will win the Stanley Cup.  That makes sense, and happens in the movie.  But the fact is that already many people feel that God is a regional God, and this artificial limitation on Bruce's powers unconsciously reinforces ideas that God is for one chosen tribe only, and does not care about other people's suffering.

Nor should the second ground rule go unchallenged, no matter how obvious it may be to some.  Why is it that God cannot change a person's free will, while humans are able to?  It has been demonstrated over and over that people's free wills are easily manipulated - by flattery, by fear, by appealing to greed, and even by deception.  If people with their limited intelligence can control other people's free will, then why can't God?  So there is a hidden message in the movie that slips by without any comment - if we accept the premise that we do have free will and that even God cannot alter it, we absorb the hidden premise that no mere mortal can affect our free will.  Aside from being untrue, it leaves people open to manipulation when they absorb this hidden message.

At several times during the movie, the premise that even God cannot affect free will is tested.  Even using the power of television, Bruce cannot win his girlfriend's affection.  Funny thing though, in real life television advertising actually works wonders on getting people to believe things, and to change their supposed free will.

So in the end, of course I do not believe all the magical powers given to Bruce or God by the film makers.  That was just for comedy anyway.  But I also question the hidden messages - one of which is the message that we have free will that other people cannot change.  We need to stay aware of the potential for propaganda, advertising, and all kinds of deceitful scams - all of which can affect people's free will.