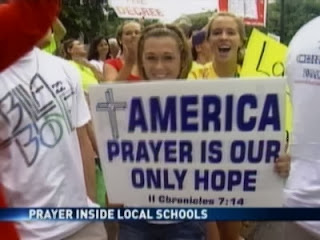 For all those religious people who want to pray in school, I have a suggestion for a prayer.  I got the inspiration from a website in the US, called PresidentialPrayerTeam.com

Back when George W. Bush was president, a prayer-focused website was put up called


I scrolled through some of the many prayers posted on the web site, where they do in fact ask for us to pray for President Obama.

Here is the prayer, that inspired me for my choice of a prayer to say in school.

"Anonymous
Many in this United States are too busy with Thanksgiving, Christmas and just life to even care or know what is going on in this country. Obama is continuing to deceive the masses and perpetrate evil. Lord this man is not our friend. He needs you in his heart in a terrible way. Father he is misguided and listening to the lies of Islam and Satan to take us down. Father reveal yourself to him and others in his chain of command in the Executive branch. Lord Jesus touch the heart of Chief Justice John Roberts as he has time to redeem himself when it comes to doing the right thing as they hear the case for religious freedom in the Obamacare bill. Lord Jesus rule in favor of righteousness and saving our faith. Amen.
Received: November 27, 2013  (Prayed 9 times)"

So based on this "prayer", I developed a short one of my own, which would be acceptable to me, even for use in schools in Canada.   And maybe somebody could even post it on the prayer wall at "Presidential Prayer Team"

A prayer for all:

"Dear invisible being or non-being that may or may not have created the universe, please help us to accept freedom of religion for all except those who use it to abuse children.  Help the misguided to understand that you created science and mathematics, but that you did not create religion.  Help them understand that you gave us brains to reason with, not to blindly follow inappropriate and chauvinistic teachings written down thousands of years ago.  Help our children to understand why freedom, democracy, and our way of life, even the very video games we play, all depend on an educated population, and not on blind faith. May you rule in favour of righteousness and a real education for all. Amen."