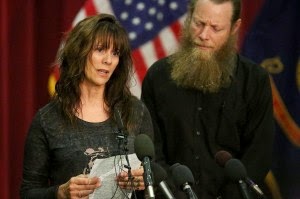 American soldier, Sgt Bowe Bergdahl is returning home after 5 years in captivity by the Taliban.  And when he gets home, it seems he will be the centre of a controversy pitting Republicans vs Democrats.  If the story so far is any indication, controversy will be based not on fair minded analysis, but on the ongoing US political propaganda war.

Up to now, I have found that there is a damaging propaganda war, creating storms of controversy about everything from the death of the US ambassador in Benghazi, to the use of spicy mustard on the President's hamburger, to the high waisted jeans he wore to throw the first pitch at a baseball game.  Texas has threatened to secede from the union, Generals in the field have been fired for showing lack of respect to the Commander in Chief. Congress is at a virtual stalemate.

Is this new controversy real or is it all made up nonsense?  I confess that I have a certain bias toward Obama, as I think he has actually done very well, although even the killing of Osama Bin Laden was turned into propaganda against Obama, and a vindication of everything the previous Republican administration had achieved.  If that can be made into a propaganda point, what can be made of Bowe Bergdahl?

The Democrat's side of Bowe Bergdahl's case,  is this.  He was the only US prisoner of war still held by the Taliban, and so they did a prisoner exchange to bring him home.  If not, he would have been left behind after the US withdrawal, and probably died due to declining health or some other unspecified immediate threat.

The Republican side is this.  Bowe snuck away from the base in Afghanistan, leaving behind a letter he wrote criticizing the US conduct of the war.  Then six soldiers died in trying to find him and bring him home safely.  Now the president of the USA is encouraging more deserters, and has broken tradition by negotiating with terrorists, and releasing five highly dangerous terrorists from Guantanamo, so that they can go and fight again and kill more Americans.

It is shocking to me that six soldier could have died on a mission to rescue a deserter.  If I was in charge of the military in Afghanistan, I would have said "It's not worth it, let him go!".  But it seems more realistic when I see that the military orders were this: If you hear that Bergdahl might be in a certain village, on your next patrol, take a closer look at that village for any signs of his presence.  This makes more sense to me, because most of the time, soldiers are not really sure of which village to patrol, but they need to patrol something, and the rumour of an American presence is enough reason to take a peek and ask a few questions.  Two soldiers were ambushed while patrolling a village where they also thought Bergdahl may be hiding, but I don't think that was much different than the usual casualties while on patrol.  Apparently four other soldier died when their base was attacked, and the argument from Republicans is that this would not have happened if soldiers were not out on patrol looking for Bergdahl.

So in the end, is it a rational argument based on what is good for the country, or is it irrational political propaganda designed to hamstring the current President and administration?

About the 6 soldiers dying, I don't really see how Obama could be blamed.  In fact, if it was true, and he could have been blamed, this controversy would have hit the fan five years ago, when it actually happened.  So the 6 dead soldiers were not directly caused by Obama's actions nor are they any reason why a soldier might be denied the right to return home in a prisoner exchange.

About the desertion, I think the controversy is premature.  I don't think there has actually been a statement by the military that Bowe Bergdahl is not going to be declared a deserter after a court-martial.  But again, I don't see how it's Obama's fault that Bergdahl has not already been shot for desertion. Time will tell for this one, and it would be nice to have a court martial first.

About releasing Taliban prisoners, well it seems about time, as the war is almost over. At a certain point, you need to either free them or execute them.  What else are you going to do?

It seems reasonable to ask questions and point out lack of judgment by the President.  But in a partisan frenzy, you can stray too far from reason, and then dissent becomes bad for the country and for the democratic process.