What Lessons Did We Learn From the Treaty of Brest-Litovsk? 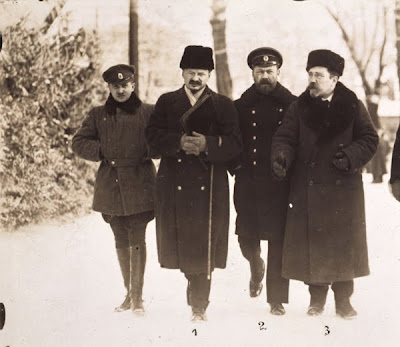 While reading about World War 2, one of the puzzling things from a Canadian perspective, is the Nazi attack on Russia, while they had England and France down. Then, another puzzling development, the war against Russia, where the initial German advance was turned back after its defeat at Stalingrad. In the final analysis, it seems it was the USSR that beat Germany, judging from the number of German soldiers they killed. Although statistics vary, the Soviet Union probably accounted for more than 70% of German casualties.

As I was reading about this struggle between Germany and the USSR in WW2, I kept coming across references to the Treaty of Brest-Litovsk. If I ever heard about this treaty before, I promptly forgot about it. It only took effect for about a year, and was torn up when Germany lost WW1.

The Treaty of Brest-Litovsk was the peace treaty signed between Germany, and the Soviet Union. Basically, it was a complete surrender by the Communist Soviet Union, which at the time had just been formed after a civil war where the Czar was deposed.

In the Treaty of Brest-Litovsk, the Germans (and their allies, including Turkey and Austria) demanded a huge amount of territory from Russia, including the Ukraine. The Soviet Union lost a quarter of its territory and people, and 90% of its coal mines.

The Russian delegation at the peace talks, in the face of such outrageous demands, broke off negotiations on February 10, 1918. The Germans renewed their military offensive, and in two weeks took most of Belarus, the Ukraine, and the Baltic countries. By March 3, 1918 a new treaty was signed, officially giving these territories their independence, but Germany began appointing aristocrats to new thrones in the newly independent countries, and began sending in troops to occupy these areas.

The quick victory of the Germans was a big disappointment to the Communists. At the time, they were quite idealistic. They believed that they represented a fresh new world-wide movement of freedom and equality for the common man. They had hoped that the workers of Germany would support them in their quest for peace and economic justice. However, the German workers did not rise up to disrupt the Kaiser's war machine. After this humiliating defeat, the Communist movement was taken over by far more cynical leaders, who had lost all their belief in the power of noble ideas, and from that time on the Communists in Russia were pretty much a power hungry dictatorship with a sugar coating of egalitarian idealism, reinforced with brainwashing and propaganda. If that failed, the Communist program continued with mass imprisonment or executions.

Following this lightning victory of the eastern front, and the final Treaty of Brest-Litovsk, Germany moved to reinforce the western front against France, England, and now the USA, and had some initial success in this attempt. Their hope was now to go all out to win the war, but it was only a few months later, they ran out of steam and surrendered in November, ending the war, and at the same time ending the Treaty of Brest Litovsk.

At this point, much of the Russian Empire was either adrift or nominally independent. In this power vacuum, the Communists then began a war to regain their lost territory over the next few years, and they succeeded in annexing the Ukraine, which I guess would have been the biggest prize in the struggle. They also waged a bitter war against Poland.

How did the Treaty of Brest-Litovsk set up the Second World War? For one thing, the USSR had a lot of Russian Jews in its hierarchy, and so the idea that German Jews had betrayed their country took hold. Hitler believed this, and eventually Nazi propaganda convinced most of Germany. The second point is that Germany had, through a quick military victory, actually taken the Ukraine and most of Eastern Europe, so it was easy for the Germans to imagine that this territory could be retaken just as easily, and probably even belonged to them. For Germany and the Nazis, WW2 was all about punishing the Jews for WW1, and retaking the lost territory of the Treaty of Brest-Litovsk.

On the west, the Germans never really had any illusions about permanently occupying England or France. If Britain and France had not interfered, the second world war would have been between Germany and the USSR alone.