Is Ubuntu Linux as User Friendly as Windows 7? 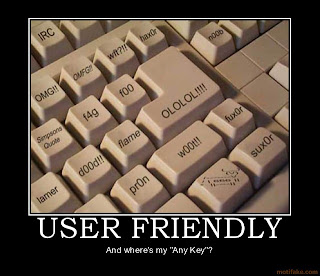 Having spent the last four days upgrading computers, The Lost Motorcyclist (me) feels a need to express my opinions about this experience, and what it means for progress in the computer world.

Mary Ann's Windows computer, and my Linux computer were both gradually shutting down. It wasn't just one big thing, it was lots of little unrelated things. For example, Youtube started giving us angry messages that our computers needed to upgrade something. "HEY YOU: THIS IS NOT A SPAM MESSAGE.. GET YOUR FLASH UPGRADED NOW!!!" When I tried to upgrade, neither computer could complete the upgrade, so we muddled on, ignoring the rude messages. Also, Mary Ann's power button was sticking, my computer booted up without recognizing the hard drive, or the mouse, or the video card, all intermittently. Mary Ann repeatedly told me she thought there were viruses in her machine, but twice when I tried to track them down, it turned out to be user error. Other times, files became corrupted. The Internet searches slowed to a crawl.

Finally Mary Ann's Internet Explorer permanently stopped responding. We decided she needed a new computer, and it had to have Windows to run Eudora Mail, and MS Office to run some custom macros in her budget spreadsheet. I also needed another computer, but I could take her old computer and see if it worked like new again with an upgrade to the latest Linux Ubuntu.

So for less than $750, we could get a new desktop plus a $100 a year anti virus program and Office 2010. The new computer has a one terabyte drive. How is she going to use a one terabyte drive? The old computer had 80 gigabyte drive, and in six years was still half empty. If my math is right, this drive is more than ten times bigger. On the other hand, her CPU is fast enough to run full screen high resolution videos, which is better than the quarter screen videos on the last computer.

Next is my computer (actually her old computer). I went to load the latest copy of Ubuntu. Now despite the friendly references to "running alongside Windows", it is not easy to make Ubuntu run alongside Windows. If it runs alone, fine, the install works well. But if you should choose to run it alongside Windows, the next screen to come up asks you to repartition the machine, and gives no instructions on how to do it. If you do it wrong, as I did the first time, it destroys Windows and all the data on your hard disk, and takes 4 hours to do so. I guess it's part of the Linux culture, to screen out wannabees, newbies, and those who are not totally committed to Linux, while pretending to be as user-friendly as Windows.

First thing I noticed is that when I installed Ubuntu 11.10, everything worked! Youtube worked (I can't remember if I needed to download and install something - but if I did, it was easy), and I could run videos with the same video player that Mary Ann's computer uses (VLC). And if any additional software was needed, all I had to do was click on the button and boom it was there. For example, I installed VLC and Gimp (a watered down photoshop) without having to wade through pages of instructions, or going into command mode. Just click on the install button.

Then I downloaded and installed Kturtle, which is inspired by the Logo programming language of the eighties. I have used Logo extensively, first on a Coleco Adam computer, and later on an IBM clone. But it is revealing to look at the differences 25 years of progress have wrought. First, admittedly, the new version of Logo (called Kturtle) is free. I paid $250 for my PC version. Second, the size. Kturtle takes 10 MB of space to download, and 250 megabytes when installed. My PC Logo and Coleco Logo each could fit on a 5 inch floppy or less (Was that 350 Kilobytes?) So at least thirty times smaller just on the install file - never mind the 250 MB disk space. And how about the power? Both my 25 year old Logos could write data to disk, and came with a comprehensive manual and had enough power to create a home budget program. Coleco Logo also had self moving sprites (up to 12 I think) and collision, trackball and event detection, and could change the shape of the sprites (or turtles) on the fly, and had subscripted variables. I was able to write a paint program with it. By comparison Kturtle has almost no real power except for moving one turtle around a screen. To be fair, there may be a lot more power hidden there, as I have only glanced at the meagre reference manual. But it seems dedicated to the ages of 3-6 years old. And it does not write data to disk or have subscripted variables. And why on Earth would they change the commands? That's right, the most basic turtle commands. "Forward 5". Logo shortened that to FD 5. Kturtles shortens it to FW 5. Is that obfuscation or what? How about RIGHT TURN 90. Logo used RT 90. Kturtles uses TR 90. That sums up everything wrong with human interfaces. Is that what we want to teach our kids?

Speaking of common user interfaces, where did the menus go? This applies to all the applications on the computer. I understood that main menus were always at the top left corner of the window executing your program, and were visible all the time. Not any more. They go invisible unless you roll a mouse over them. Bad enough I guess, if you LEAVE THEM IN THE SAME PLACE!!! But now the (invisible) menus are all in the top left corner of the monitor screen. I couldn't find this valuable information on Google, (try googling "missing menus in Ubuntu 11.10) and finally found it on my own by sheer luck.

Anyway, Ubuntu 11.10 is catching up to Windows, and it's free and easily reinstallable by ordinary users. It has Word and Excel file compatibility also free. (but not macro compatibility - so my fault for writing Excel macros ten years ago that I still use). Ubuntu is nowhere near as virus prone as Windows. And it took me about as long to fiddle with Mary Ann's new Windows computer as it did to do the new Ubuntu install (if you subtract the wasted four hours of reformatting my disk). And that is after I paid the Future shop $120 to clean up all the commercial marketing crap that comes with the new Windows computer, and install an anti virus program.

Next time Mary Ann's computer needs replacing, I will find some alternate to those Microsoft Excel macros first. Then we can both use Linux Ubuntu.