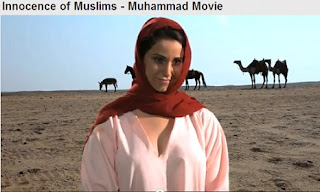 So here we come to the latest free speech argument, the anti Moslem movie called "Innocence of Muslims" that has apparently provoked a storm of violence in the Muslim world, and resulted in the death of the US ambassador to Libya.  It is not really clear in my mind, who made this movie, but it seems very clear that the movie is ideally suited to ruffling the feathers of  Muslims.  As far as I can see, the movie has no other value, as it us unfunny, inaccurate, and uninteresting.

One thing that no one else seems to be willing to mention about the movie "Innocence of Muslims":  Was it made for the specific purpose of helping Al Quaida?  The reason I ask, is because it has no other useful purpose due to its low quality and crudeness.  And if its only purpose is to promote terrorism, couldn't we start by investigating the background of the people who made the movie, to find out if they are secret Al Quaida sympathisers?  I'm not in favour of torture, but with a little waterboarding you could probably make the director confess to being a member of an Al Quaida sleeper cell, then record his confession and play it on TV.*  That should quell the violence and rioting a little.

But now let's take a closer look at the free speech issue, which is used to defend the movie. I believe free speech is becoming one of the right wing conservatives favourite values.  Why do they favour free speech, and why do liberals seemingly oppose free speech?  Well, first of all I don't think liberals oppose free speech.  But liberals take a dim view of racist propaganda that encourages violence against women and minorities.  Actually, everybody regardless of their political persuasion hates people who shout fire in a crowded theatre, (unless there really is a fire).  So liberals are actually in favour of free speech, but don't really know how to handle intolerant, racist, and violent opinions of others.  Conservatives do not really believe in free speech, and use the current tolerant social climate favouring free speech to push boundaries, and by so doing, prove free speech does not really work.

Here are some ways to push the boundaries on free speech.  Phone in a bomb threat to an airport, and call it free speech. Call for the extermination of some minority group, then claim you were exercising free speech.  Write articles encouraging men to beat their wives.  Speak out about the right to lynch Negroes.  Set up a TV station that knowingly broadcasts slanderous, false, and misleading information every day, and fight the lawsuits with the "Freedom of speech" defense.  Use the free speech argument to allow unlimited money to be used in political campaigns.

One reason why conservatives are so much more vocal about free speech than liberals, is because conservative run afoul of the hate laws more frequently.  Conservative rhetoric against muslims, abortionists, and homosexuals tends to draw fire from human rights groups, from anti-racist organizations.  Their main defence is their right to "Free speech".

Liberals understand free speech, so they do not generally abuse it.

* Is this sentence protected under the free speech principle?  If not, I was only kidding, of course.

Picture from the movie and from this blog: http://reynaelena.com/2012/09/17/innocence-of-muslims-and-the-freedom-of-expression/
Copyright the Lost Motorcyclist