Is a God Gene More likely than a Scientific Gene? 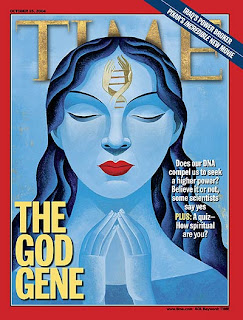 I looked up "God Gene" in Wikipedia, and I'm kind of puzzled about why it got the name "God Gene", unless God Gene is just a catchy name which helps get people thinking.
As the author admits, even if a God Gene exists, it is not proof God exists.

Looking for a God Gene is based on an incorrect, unspoken assumption, which is that humans are rational.  So apparently we need a genetic code to explain why some humans have faith in God.  The simple fact is that most humans are quite irrational in many ways, driven by their passions, habits, and desire to impress others, that our senses are not only imprecise but often totally wrong.  Our memories are fallible, and we sometimes cannot distinguish dreams from reality, or even hot from cold.  All these things should be considered before we start talking about a "God Gene".

It is true that religion has been part of many, if not all human cultures through history.  This can easily be understood if we realize that humans are not perfect thinking machines, and are subject to illusions and distractions. In that case, do we really need a gene to explain why people believe things that other people tell them without any proof?

From Wikipedia, here is what the God Gene is supposed to do.

" the God gene (VMAT2) is a physiological arrangement that produces the sensations associated, by some, with mystic experiences "


The mystic experience can be

And there are also some other religious phenomena such as faith healing, miracles, visions etc.

Maybe we should be looking for a "Scientific Gene" instead of a "God Gene".  For one thing, it would be much easier to define.  A Scientific Gene would predispose people to ask questions, to know the difference between truth and delusion.  An ability to look at the world and see things as they really are. The ability to see both sides of a story, and shades of grey in the middle. It would include the ability to compromise and use reason and logic.  I believe the scientific gene is much more rare than the God Gene.  Actually, it is logical that if the Scientific Gene exists, then so would the God Gene, in that the God Gene would simply be the off state of the Scientific Gene.
http://blog.beliefnet.com/astrologicalmusings/2009/11/jupiter-and-the-god-gene.html
Picture from and of course, Time Magazine
Copyright the Lost Motorcyclist