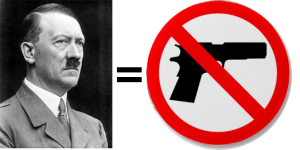 Last Sunday sitting at Tim Horton's a friend of mine stated that Hitler had taken guns away from the German people, the implication being that putting in gun controls in the USA would be a precursor to tyranny.  Although this statement was likely to come from dubious sources (like the NRA), I had to let it go, but remembered to look it up when I got home.  What I found was the exact opposite of the belief that Hitler was a leftist gun-control freak.

First, from Wikipedia, a bit of history around gun controls in Germany.

After Germany lost WW1 in 1918, it was the victorious allies that made it illegal for German citizens to own guns, not Hitler. Hitler had not yet appeared on the political scene, and would not have substantial power until at least ten years later.

In 1938, Hitler did pass a "gun control" law for the German people, but it was actually to ease off the original harsh disarmament after the occupation of WW1.  So Hitler actually made it easier for German people to own guns.  Surprisingly, Hitler's gun control law did not specifically exclude Jews from owning guns, although the law did exclude people of questionable trustworthiness, whatever that means to a Nazi.  And apparently many Nazis did think that Jews had questionable trustworthiness.  But Jews were a very small part of the German population, less than 600,000 in a population of 60 million.  Overall gun ownership in Germany went up under Hitler.

It kind of makes sense that Hitler supported increased gun ownership too, because this law helped the entire firearms industry, that the Nazis would be needing soon.  Because they could sell more guns, they could ramp up production easily for war.

Hitler did make some comments about disarming the people.  I got this from a right wing web site: "Hitler was a Leftist"

This is Hitler's statement.

"The most foolish mistake we could possibly make would be to allow the subject races to possess arms. History shows that all conquerors who have allowed their subject races to carry arms have prepared their own downfall by so doing. Indeed, I would go so far as to say that the supply of arms to the underdogs is a sine qua non for the overthrow of any sovereignty. So let's not have any native militia or native police. German troops alone will bear the sole responsibility for the maintenance of law and order throughout the occupied Russian territories, and a system of military strong-points must be evolved to cover the entire occupied country." --Adolf Hitler, dinner talk on April 11, 1942,


I'm surprised that the quote seems to be intact, often it is found with the part about "in the occupied Russian Territories" left out.   But Hitler is quite right about disarming countries that you conquer.  He also disarmed the Dutch people after they surrendered in 1940. After WW2, the British, American, French and Russians also disarmed the Germans, as the Allies did after WW1. It is commonplace, and it does not make you a "leftist" or a "rightist" either.  Everybody seems to agree on disarming conquered people.


Here is another article on Gun control in Germany by William L. Pierce.

The most ironic thing about all this is that Hitler's main tool for gaining control of the German people was Propaganda, not Gun Control.  And this little story about Hitler being a gun control freak is basically modern right wing propaganda that many people seem to be falling for.  A strong democracy depends on an informed population.  Disinformation is the tool of tyrants, and far more powerful than gun control.  Hitler used propaganda to make Germans hate the Jews, just like right wingers today use propaganda to make people hate liberals, Muslims, socialists etc.  Once the hatred for Jews was accomplished, Hitler had full control of Germany.  The propaganda of hate is the real precursor to tyranny.