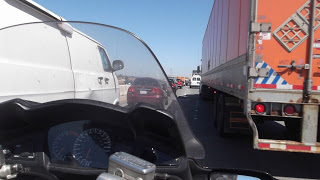 Lane splitting is done by motorcycles when they ride on the dotted line between the lanes to overtake two vehicles that are driving side by side in two separate lanes. Southern Ontario is not a lane splitting place, probably the closest place where you can lane-split is California.  So I don't have a lot of experience with lane splitting, but I do remember being in California about 25 years ago, on a bike, and being in heavy freeway traffic I saw some motorcyclists pass me by lane splitting.  I was going to try the same thing, but as I gradually moved onto the white line, I narrowly missed being hit by another lane splitter who came from behind, at what I thought was a very high speed.  For the rest of my two days in California, I stuck to one lane.

Even in California, lane splitting is not completely accepted.  According to Wikipedia, less than 60% of car drivers in California think that lane splitting is legal.  Apparently, it is not fully protected in the highway code, and it is also not completely illegal.  It is tolerated by the police, but if a motorcyclist has an accident they don't have much legal protection.

Here are some of the problems I see with lane splitting.  Cars and trucks tend to move somewhat erratically from one side of their lane to another, and if the two vehicles on ether side of you randomly move closer to each other while you are trying to get between them, you may get trapped.  So lane splitting is more safely done when the traffic is stopped.  But many motorcyclists do lane splitting at high speeds, even above the speed limit in some cases, and even if the traffic is actually moving along quite well.

If I was to actually do some lane splitting, I would want to do it where it was legal, where all the car drivers knew about it, and where the lanes were a bit wider (like California). I would also want a different bike, with narrow handlebars (like 24" instead of my current 36" handlebars), and no saddlebags sticking out.  Hooking a car or truck with your handlebars is a sure way to lose control.

But getting back to Ontario, it seems Ontario has a culture of lining up.  Go to Tim Horton's and see what I mean.  Also, if there is a closed lane ten miles ahead, everybody lines up immediately and frowns at the occasional car that continues to drive in the "closed" lane.  I think of that as just about the complete opposite of lane splitting.  You have an entire legally marked lane there for ten miles until it is closed down by safety cones, but most people don't think you have the right to use it.


Now from Cyril Huze motorcycle blog, three motorcyclists try to convince us that lane splitting should be allowed everywhere. I don't agree with everything they say, but one point in particular I think is wrong, and illustrates that maybe some of them slept through math class. A Toyota Prius does not get 0 mpg sitting in a traffic jam.   To get 0 mpg, you must be using some gas.  But a Prius has the engine turned off, and so mathematically you have zero divided by zero which is   "Undefined"

Picture: From this blog Motorcyclephilosophy.  Another thing I would not do while lane splitting is take pictures. But then I have a  handheld camera.