American Exceptionalism, According to Putin 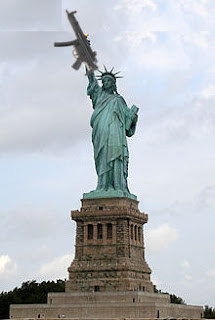 Apparently, a tempest is brewing over American Exceptionalism.  It started this way.  Syria's president, under attack by rebels, allegedly used chemical weapons (like nerve gas) to kill many innocent civilians.  President Obama, having warned Syria previously that the use of such weapons would not be tolerated, began to make preparations to bomb Syria as punishment.  This bombing did not have the approval of the UN, because Russia is an ally of Syria, and would veto the move.  Russia proposed a plan where Syria would hand over all it's chemical weapons to an international agency for destruction, and sign the international ban on the use of chemical weapons.  Obama cautiously agreed to this solution.

Next, in an unusual move, Russian President Putin took out an ad in the New York Times.  In his ad, he explained his side of the story to the American people.  He said that the chemical weapons attack was a fake by the rebels to encourage the US to bomb the Syrian Army.  And he apparently made some negative comments about "American Exceptionalism".

So what is American Exceptionalism?  There is an entry in Wikipedia to help define it, but not all Americans agree on this definition.  Apparently, to American right wing extremists, it means that America is the greatest country on Earth, and consequently, international law does not apply to them.  (One reason why the USA does not support the International Criminal Court at The Hague).  In other words, they may bomb whoever they like (e.g. Serbia), and invade any other country that they consider to be a potential threat (e.g. Iraq).
http://en.wikipedia.org/wiki/American_exceptionalism

Putin warned that this "exceptionalism" idea is dangerous to world peace.  He probably got this idea from the Russian experience in World War 2, where they were invaded by a country whose main philosophy resembled the extremist interpretation of "American Exceptionalism".  So given the many millions of Russians killed in that war, which the Russians eventually won (With American aid, I might add), it would be natural for Putin to make such a statement.  Because whether or not American Exceptionalism is dangerous, other countries may adopt similar postures, and begin to flout international law.

But the fine points of this debate seem to be lost on the American Conservatives.  Fox News, and The American Spectator are some examples.

Is American Exceptionalism real?  Well, if it ever was real, it is getting less real all the time.  The first indication of being a truly exceptional country is to have a well educated, well informed, and tolerant population.  This ignorant fury by some conservatives demonstrates just how unexceptional Americans are. Every country in the world has a portion of its people who are easily brainwashed, greedy and bloodthirsty.  We are really all the same, although Putin did also say we were also all different.

Picture: I photoshopped the statue of liberty, replacing the torch with the gun.
Copyright the Lost Motorcyclist