Men vs Women: Choosing a Motorcycle 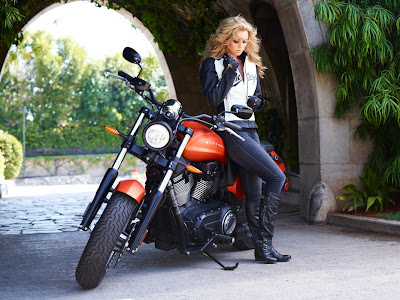 I think we can all agree that men have some trouble understanding women.  So any man writing about what makes a good woman's motorcycle is going to need some diplomacy and tact.  Since I have plenty of those, I will start the topic.

But first, here is a look by Visordown writer Ben Cope  http://www.visordown.com/features/10-best-motorcycles-for-women/22057-11.html
It's called "10 best motorcycles for women".  And you must know in advance that there will be disagreements, both on the details (which exact bikes are selected and left out) and in the overall philosophy (why should men be picking bikes for women, why do all the selected bikes have smallish engines, why don't you acknowledge that some women are bigger and stronger than some men?) etc.

I am going to sidestep a lot of those issues by not trying to pick out ten bikes for women, just leave that to them.  I will begin with some observations about Mary Ann's choice of a bike.  My bike was a BMW K1100LT, and I actually had two other bikes, licenced, insured and road ready, that she could have used.  She is 5' 10" with a 32 inch inseam.  So she could physically handle any of my bikes, including the 600 lb. BMW, with a bit of practice.  So, instead of picking either my 1972 Honda 450 Scrambler, or my 1969 Honda CD175, she chose to buy a new used Suzuki Burgman 400, which cost about $7,000 and consequently I had to get rid of one of my bikes, as there was not enough room in the garage.

Now the question is, what female logic would have prompted this counter-intuitive decision?  Because I am assuming it was something to do with female logic vs. male logic.  First the cost.  For a man, the cost of a bike is important.  For a woman it is a relatively trivial point compared to the actual decision to ride a motorcycle.  For a man who wants a motorcycle, it's just a question of how much bike he can afford.  A woman wants to ride a motorcycle that she can actually use with safety.  Men are dismayed when their new bike is not as big as somebody else's bike.  Women (some women?) don't care too much if their bike is not the biggest, honkinest, loudest badass bike in town.

As soon as Mary Ann saw a Burgman and found out that it was automatic, and could travel on the freeway if necessary, she made up her mind that she did not need a traditional bike.  She did not need to learn the intricacies of clutching with the left hand, shifting with the left toe,  braking with the right foot, all while balancing a moving motorcycle.  She could just use the hand controls like a bicycle (plus throttle of course).  I'm not saying all women, or that only women think this way, because I can also see the appeal of not having to shift gears 1000 times every time I go out for an afternoon ride.  But I think a woman might see the advantage a little sooner than a man.

Once again, I have the disclaimer that not all women are like this, but Mary Ann was not at all put off by the repair and maintenance issues of the scooter.  She doesn't worry too much about how many plastic panels must be removed to do an oil change, or even replace a light bulb.  She just assumed I would do that.  In most things she is quite independent, but when it comes to scooter maintenance, it's either I do it or the Suzuki dealer does it.  She tried a few times to do some simple things like change the oil, or pump up the rear tire, but it was just not that appealing to her.  Or she had more "important" things to do.

So in summary.  Mary Ann could have had any one of my three motorcycles, or could buy a cheaper brand new traditional motorcycle, but instead wanted to have a Suzuki Burgman scooter.  And, I don't mind riding the Burgman either as driver or passenger.  Lots of guys have Burgman scooters, and even smaller scooters than the Burgman, and I understand the appeal.  But at the same time, I think Mary Ann's choice of the Burgman was influenced by feminine logic and intuition, which to some extent, values ease of use over desire for bone crushing, pavement shredding performance.

We got her Burgman in 2006 with 2000 km on it.  In seven years, it now has 44,000 km, and a few more scrapes from falling twice on gravel roads.  I have probably driven it 5,000 of those kilometers, and Mary Ann did the other 37,000.  She has not grown bored with the scooter, and does not desire more power.  She still loves it when people ask her questions about the scooter while riding around. Maybe even more now, when she can actually answer most of the questions herself.

Picture: Once again the difference between the male choice and a female choice, but this time the choice of a picture.  Was this picture chosen by me, or by Mary Ann?  It is Victory Motorcycle Girl Ciara Price, Playboy Playmate of the Month for November 2011, on the blog:
http://blog.leatherup.com/2012/06/14/victory-biker-girls-playboy-playmates-compete-for-the-cover-of-victory-motorcycles-new-brochure/
Copyright the Lost Motorcyclist