Is Megyn Kelly a Racist? (And a lot of other people) 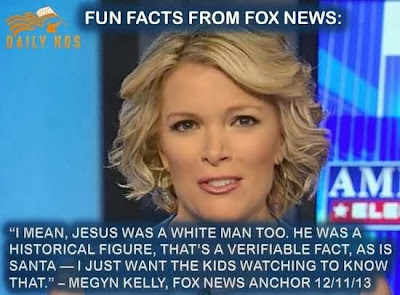 There has been a controversy about Megyn Kelly saying Jesus is white, and a big part of that controversy centres on whether or not the comment was racist.

Here is my proof.  The fundamental belief that is necessary to support any racist system, is that people can be classified neatly into races.  Let me give you an example.  In Nazi Germany, in order to support their racist policies, not only it was necessary to believe that "Germans" and "Jews" were two different races, but it was necessary to believe that you could easily classify any person as either a Jew or not a Jew, and based on that certainty, you (as a for-sure-German) were now morally permitted to ban the for-sure-Jews from your society.  And then to kill them when it suited you.

To be non-racist, you would have to believe that being a Jew or Non-Jew did not matter.  Another small but important part of that non-racist point of view is that you cannot always tell whether someone is a Jew or a non Jew.

This argument about being able to tell which race is which is fundamental to racism, and cannot be ignored.  A racist always tends to think that races are immutable, that mixing races is an abomination akin to homosexuality.  If you believe that mixing races is not a problem, and recognize uncertainty, then you are probably not a racist.  In fact, logically, I do not think it possible to be a racist if you do not think in absolute terms.  Separating the races is absolutely fundamental to racism, without it, racism cannot work.

Now for Megyn Kelly's remark that Jesus is white, because it's a historical fact.  To me, just the very fact that Megyn apparently believes that it is a "fact" that Jesus is white, and makes me wonder if she is racist, whether the historical "fact" is true or not.  And I'm pretty sure Megyn Kelly does not think of herself as a racist, but then that's true for most racists these days.

But is it really true that Jesus is absolutely white?  Well, no.  For one thing, if he was a historical person, then when he was alive he was probably something in between white and black.  But for true Christians, Jesus is much more than a historical figure, he is "Son of God", right?  So if Jesus has a race then God obviously has a race, as I think we all agree that race is handed down from one generation to the next.  So by saying Jesus is white you are saying God is white.  Carrying this racist idea a little further, you are also saying that races exist in Heaven.  (Heaven being where God and Jesus "live" right now.)  And you are making an assumption that if any orientals, black people, or Arabs make it to Heaven, they are going to be stuck with their race for all eternity.  And I'm sure Megyn thinks that when she goes to Heaven, she is still going to be a cute white girl, and her opinions will still count for something.

Another thing that is believed by many (if not all) Christians, is that Jesus is coming back to Earth.  Not as a spirit, but as a real man, like he did back in year nought.  After all, Jesus himself said so, he just didn't give us the precise date.  I'm sure you see by now where I'm going with this, but anyway... Jesus will have do decide what race He is going to come back as.  Does he come back as the same race as last time, or does he pick some other race?  Does he come back as a man or a woman? I'm sure the white supremacist Christians would have a conniption fit if he (or she) came back as a black ghetto kid.  In fact, I'm pretty sure they would absolutely deny that this was Jesus, no matter how much water he turned into wine or people he raised from the dead, how much water he walked on, or how many people he could feed with a basket of loaves and fishes.

In my opinion, if people in America do not believe that race exists in Heaven, then they can say they are not racists.  But if they believe that Jesus was white, and stays white in Heaven, and will be white when he returns to Earth, you can tell they are still racist.