Owning a Cat is Not A Type of Slavery 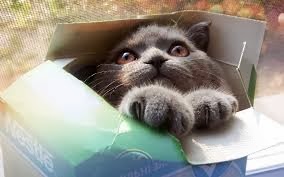 This may be an old question, but I only heard it recently.  Is a person who owns a cat the same as a slave owner?  I want to answer this question for two reasons.  I did own a cat, and second, slavery is the argument that fuelled the trend to extreme Bible Literalism.

I admit that I did not pay my cat any money for working for me.  On the other hand, he did very little "work" other than scratching up the furniture and barfing in surprising places. So that is the end of the similarity of pet owning to slavery, now I will give my reasons for supporting pet ownership, even though I oppose slavery.

If my cat runs away, I don't send dogs after it to tear it to shreds, then whip it or cut its legs off when I get it back.  Also, there is no law in the land that compels me to commit such barbaric acts to my cat.  Au contraire, I would be punished for "cruelty to animals" for doing it.  And there is no passage in the bible supporting such cruelty to cats.

The problem with slavery was not so much about paying slaves proper salary. Slavery simply was an evil governmental institution that also spawned an evil religious cult.  A cult that used the literal interpretation of the bible to justify such barbarity against fellow human beings, that today we would call it institutional terrorism.  Fundamentalist religion made slave owners feel that any evil they did would be forgiven, because the Bible itself told them that slavery was performed with God's blessing. And the Bible could never be wrong.

End of argument, but I still have more to say!

Post Script:
It is unfortunate that even to this day we have people indoctrinated on this old-time religion from the Slave States/Bible Belt, putting forward the same old arguments that make no more sense today than they did before the Civil War.

It's obvious to me that we must continue to argue about slavery with extreme Bible Believers.  We cannot allow Bible Fundamentalists to sabotage the public education system by changing the topic from slavery to an argument about evolution and "Darwinism".  Let's take the fundamentalist religious controversy back to slavery, where it started, instead of letting it spread its curse of ignorance to all aspects of our society.

Picture: Kitten jammed in a tight box on a slave ship to America.