Birdwatching Can Get Political... if you are in Canada. 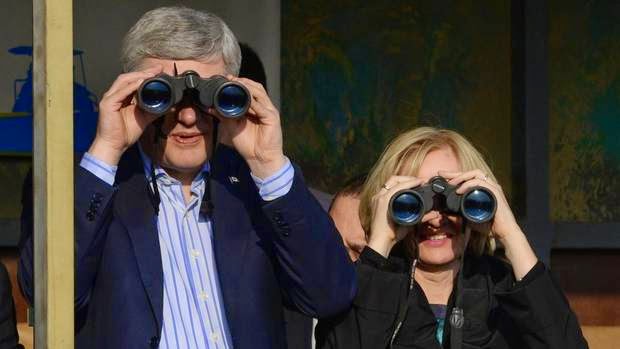 Mary Ann and I both belong to a club called the Kitchener Waterloo Field Naturalists.  It would be unkind of me to call them (I mean us) birdwatchers, because we are much more. In addition to watching, and counting, species of birds, we are also watching trees, flowers, mosses, insects, fungi, salamanders and lichen.  And probably a lot more, since I am not one of the most observant members of that club.

It came to my attention that there was a CBC news item about the club.  The story is that the Federal Tax department (CRA) sent a letter to the KWFN, warning them to not get too political. Apparently, the club had sent a letter or two to politicians, urging that (a) bees were at risk due to some chemical spray, and (b) the Ontario Government should not water down the "Endangered Species Act".

Now, I know that feelings can sometimes start running high about threats of a tax audit. At least one member of the club was willing to speak to CBC reporters about his feelings of being muzzled by the Federal Government (in the embedded video).

On the other hand, you have level headed internet commenters like 123noitall saying
"Follow the rules like everyone else...or drop your charitable status and do it on your own."

I want to take an objective position here, and try to be fair about this news story.  First, the CRA did in their letter admit that the KWFN had done nothing wrong.  So why did the KWFN get a warning letter?  Because in their official financial statement, they had reported 0 dollars under political expenses.  Since writing two letters can easily cost you a few dollars postage*, the CRA merely was reminding the club that it should report this as a political expense.  The Federal government has decided it is political to write a letter to politicians urging them to pass or amend laws. And once the political expenses get over 10% of your budget, you are deemed too political, and must abandon your tax free status.  The KWFN also had a speaker at one meeting talking about the tar sands, and urged members via their website to look into the David Suzuki "Blue Dot" tour.  All these things could cost money- so many megabytes of web space, and honorariums for speakers.

*A further wrinkle is that you are allowed to send mail postage free within Canada to the Government under these rules, which I'm not sure if they apply to provincial governments:
http://www.canadapost.ca/tools/pg/manual/PGgovtmail-e.asp

The CRA, for its own part also has to be very careful to not give the appearance of partisan bias.  So they have to be very careful to investigate conservative bird watching clubs just as much as liberal bird watching clubs.  It's the same when they are investigating millions of dollars being hidden offshore by wealthy Canadians.  They cannot investigate just the liberal minded tax avoiders, they must pay equal attention to conservatives hiding their money offshore. And I guess they have been pretty non-partisan about the whole thing, because the CRA don't really have the budget to investigate any offshore banking (liberal or conservative), while they do have an increase in their budget to check out virtually all birdwatching clubs in Canada for unreported political activity, liberal or conservative alike.

So I don't think there is really all that much muzzling for us free Canadian citizens to be concerned about.  As long as you correctly report your expenses when sending a letter to your member of parliament, you will be fine.

Here is a link to another blogger who has commented on this story, but he is not as even handed as I was in my judgment.
http://montrealsimon.blogspot.ca/2014/10/big-brother-harper-and-gentle.html

Picture: Steven Harper and his wife set an example, engaged in some non political birdwatching.  Ironically, he has a bird sanctuary named after him in Israel. The Stephen J. Harper Hula Valley Bird Sanctuary Visitor and Education Centre, Israel
http://www.theglobeandmail.com/news/politics/harper-tours-holy-sites-in-israel-visits-bird-sanctuary-named-after-him/article16446088/