Where is the Real Disappointment? 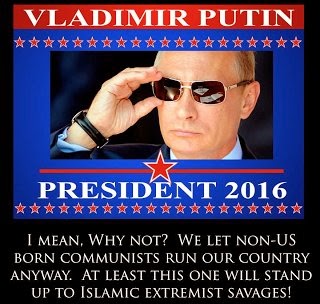 Look at this picture of Putin for Prez. from http://secretdatabase.blogspot.ca/2014/04/putin-fair-haired-poster-boy-and.html

Are Americans nuts, or is this a Russian ploy to take over the world?

But it does seem that many Americans are disappointed with Obama.  Especially those who listen to Fox News, but the disappointment is spilling over to other outlets, such as the Washington Post and CNN. I saw part of a program on CNN titled "Is Obama the "Disappointer-in-Chief"?  And then I found an article on the Washington Post website titled "Barack Obama, disappointer in chief"  by Aaron David Miller.

Speaking as a Canadian, who was relieved to see Obama win the 2008 election, I am not disappointed.  Well, at least I am not disappointed by Obama except for one thing, there should have been some major prison sentences for the Bank CEO's who instead got huge bonuses from the bailout.  But since I didn't pay for that bailout with my taxes, I guess I have nothing to complain about.

But I can understand why many Americans feel disappointment.  They look at presidents like George Washington, Abraham Lincoln, Franklin Delano Roosevelt, and JFK and they think that Obama simply doesn't measure up.  Washington was the military genius who defeated Britain in the war of independence, Lincoln freed the slaves, FDR ended the depression and won two wars (counting Germany and Japan separately), JFK was a very nice looking president who would have done more if they had not killed him.  Compared to those guys, Obama seems to be just a pretender to the title of Best. President. Ever.

But let me set the record straight.  Those other presidents are historical figures, while Obama is a current events kind of guy (for now).  If you move forward about 100 years, Obama will still be known as the first black president in US history.  And, if I guess right, there should be less racism in the US than there is today, so it is quite possible that history books will be very kind to Barack Obama, just as they were to those other guys.  And a lot kinder than Fox News, CNN and Aaron David Miller. History will remember Obama as the president who gave the USA decent health care.  Of course I am assuming (going by Canada's history) that health care will not bankrupt the United States.  And in 100 years, he will still be the president who got Osama Bin Laden. (If anyone asks)

My own interest was mainly in recovering the US (and Canadian) economy, which was teetering on the brink of collapse. Actually, I'm pretty sure that the Republicans under Palin and McCain would have recovered the economy too, as they were already involved in bailing out the banks under President Bush.

But now I'm starting to worry that the Republicans will gain power yet again, and start another war and crash the economy like they did last time.  Especially if they cannot learn any lessons from the Democrats who were able to steer the country away from disaster under Obama.

And P.S. for the Fox News announcers wailing that we need Mr. Putin as president of the U.S.A.   Are you nuts?  It's one thing to whine about everything Obama does, from mustard on a hamburger to his high(normal)-rise blue jeans.  But to wish for Putin as president?  Well, I'm sure he would "get things done", but he is now pretty much a dictator in his home country of Russia, and seems to have the same power as the Communist party did in the past.  Are you really willing to give up freedom so easily just to be able to scare a few Arab terrorists in the Middle East?  Now, that is disappointing.