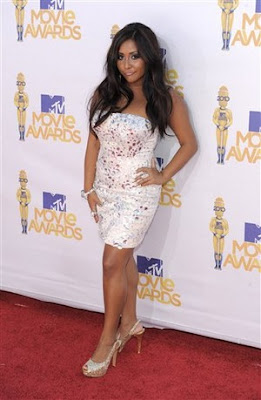 While Americans fret that their guns are being taken away and the economy is in the crapper, there is always enough time for another Obama related scandal: this time Snooki-gate.

If you heard about this anywhere else, here are his actual words, because many people make up their own words to heighten the scandal:

In response to a question about whether Snooki would be a good mayor of Wasilla Alaska.

Obama "I gotta admit, I don't know who Snooki is."

Of course nobody says it is a scandal to not know who Snooki is, as she is a TV reality show character. And it is not a scandal to say you don't know whether she would be a good mayor of Wasilla.

The real scandal was the fact that Obama was lying about his knowledge of Snooki, or at the very least, engaging in a cover-up of this knowledge. Earlier this year, at the press dinner, he actually told a joke that specifically mentioned Snooki once by name. Of course, it may be that he didn't know who Snooki was even when he told the joke. But at this point, it has become a full blown scandal, as you can tell from the "-gate" added at the end of the word "Snooki". So we want to know what he knew, and when he knew it, about Snooki. Was he really so smug and arrogant that he told a joke about Snooki without even being briefed on (and memorizing) who she was? Does he hire speechwriters for his gags, or does he sit down in front of a TV for several weeks to catch the flavour of the current TV shows and then write his own humorous pop-culture material?

A guy who was blasted for putting mustard (not ketchup) on his hamburger a year ago, should be a lot more careful about what he says on national TV!

OK Ok, so I am being facetious. I must also be getting less tolerant in my old age. My real opinion is that the people who talk about this as though it was an example of Obama lying are idiots. I'm sorry there's just no other word to adequately describe it unless you allow me to also call them racist idiots.

And one more thing, for you guys who claim that Obama should have better things to do when the country is in the crapper: Your country is not really in the crapper just yet, but it is not far from it due to the unusually high percentage of complete idiots in the population. Unless all those Internet comments are by the same person.

Picture: Snooki. So President Obama, in case you're reading this, you can get an idea of who she is. She is a girl who says she is from New Jersey (the dumbest state in the union according to some) but she is not. So she says she is from New Jersey I guess to make it funnier when she acts like an idiot. And most of the rest of the "reality" show cast do the same except one girl who really is from New Jersey. The show is called "Jersey Shore" I think. Check it out. I'm not sure of the time or the channel, so have a secret service guy look it up for you. Then you can figure out for yourself if she would be a good mayor of Wasilla. Stay safe, thanks for reading my blog.
Copyright the Lost Motorcyclist