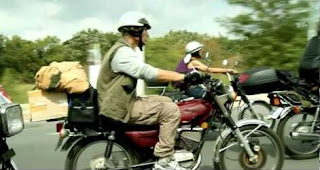 This is a commercial called "Dream Rangers" on Youtube, I'm not sure what it's selling exactly, or why it's made by a bank, but it tells an inspirational tale of some old men dusting off their motorcycles and going for a group motorcycle tour.

There are a lot of reasons that I feel something from this video. When I first started riding I was 21 years old. Now I'm 62 and of I have been feeling the effects of aging, and several of those effects have made it more difficult or possibly even dangerous to go motorcycling. When I was young, it was all about the bike not breaking down. Now the bike is fine, it's all about me not breaking down. But I'm still almost 20 years younger than the average age of the group in this video.

One of my older friends had to give up riding a few years ago, and has since died. I know quite a few people who used to ride but do not any more. I would like to at least be able to ride as long as possible. I think as I get older, I would even be willing to change over to a motorcycle that is easier to handle, such as a scooter or even my CD175.

I was interested in knowing if this was really based on a true story. The "Dream Rangers" video, although obviously staged, is apparently based on these men who spent thirteen days traveling around Taiwan -1139 kilometers. There is a documentary about their trip, which looks believable.

An introduction to the documentary is here (called "Go Grandriders"):

Anyway it's nice to keep the dream alive.
Copyright the Lost Motorcyclist