Who Do You Vote For In Canada? 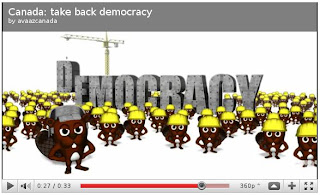 With the opposition to Stephen Harper split between four parties, this election may finally give him the majority he needs to carry out his most unpopular policies. His agenda has been delayed by years of Liberal rule followed by a frustrating Conservative minority rule.

Ignatieff, the leader of the Liberals, made a serious error early in the election stating that he would not join a coalition against Harper.

In a surprise turn of events, the Liberals have slipped to third place in the pre-election polls. The NDP, led by Jack Layton are running second.

Canada is a country where it is quite easy for one strongly united party to rule the country even when most of the people vote against it, as we do not have a "top-two" runoff system. Whoever scores highest in the first round ballot wins, as there is no other ballot. As a result, many Canadians waste their first vote on parties that are not even in the running, and are not given a second chance.

If you would like to Stop Stephen Harper and the Conservatives, there is a way to make sure your vote counts, even without reforming this voting system. Simply cast your only vote for one of the top two candidates instead of the candidate of your choice. This is known as "Strategic Voting".

How do you do that, when you don't really know who the top two candidates are? Well, you may be surprised to know that polling organizations have the advanced numbers on how people say they will vote, riding by riding, and the information is available on the internet. Click on the link below, enter your postal code, and you will see the latest poll numbers on your riding.

This is the website link: http://www.avaaz.org/en/canada_elections/?vl
Copyright the Lost Motorcyclist