Put on Your Hip Waders, the Gun Debate is Back 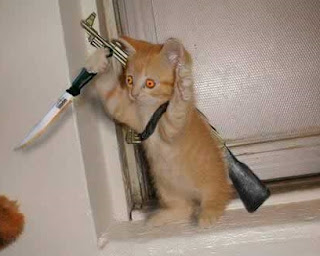 As the gun debate heats up again, I remain convinced that it is one of the most illogical debates I have ever heard.  It makes about as much sense as debating witchcraft or runaway Toyotas  (actually those of two of my favourite topics.)

This morning I read the story of a US Navy Seal gunned down on a shooting range.  I am pretty sure that the NRA will not be able to use the old argument that it happened because "there were not enough guns at the range" and/or that "more guns are needed to protect people at the shooting range".  I wait to hear what their response will be.

But the other story is Sarah McKinley, an 18 year old mother living alone with her baby, who shot and killed knife-wielding intruder Justin Martin.  This story is of course the ideal one to support the NRA's position that assault weapons should be allowed, because it would have made Sarah McKinley even safer than just using a 12 gauge shotgun.  Does their position make any logical sense?  Of course it does if

1. You assume Sarah McKinley will do a better job killing the intruder with an assault rifle than with a shotgun.  (hint, he's dead.  He can't get any deader)  I'm sorry, I didn't present the NRA's side fairly.  They actually said, not that she would kill him deader, but that she would have more chances to kill him if she missed, and that she would be braver with a scarier looking gun, and that Justin Martin would more likely have been scared away by a scarier looking gun.  I don't buy that argument either, because it really does not make a lot of sense to me.

2. The biggest, most illogical assumption is one that I do not see mentioned anywhere. It is the assumption that only Sarah McKinley will have access to buy and carry an assault rifle, but Justin Martin will not be able to do so.  Nowhere in the NRA manifesto does it say that only mothers with babies can have scary guns, and not the men breaking in.  In fact, just the opposite is true.  They want everyone to have access to scary guns, and they are not supportive even of background checks.

Now my question is, was it Obama who took away Justin Martin's gun?  Justin apparently carried only a 12 inch hunting knife.  The point of this story is relevant to the issue of gun control.  In fact, I might even call it the central issue of gun control.  The NRA wants to make it possible for the Justin Martins of the world to have more guns, and the proposed NRA solution is to also give scarier guns to defenseless women.  If that is going to make the women safer, then please refer to the Navy Seal story this morning.