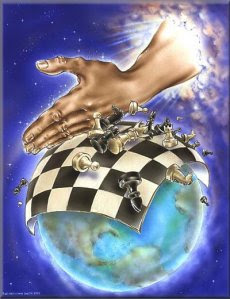 In an earlier blog titled "How Intelligent is God Anyway?", I discussed how God must be infinitely more intelligent than Humans. And I gave several examples of how He could display this intelligence, and why He might not want to.

Now I want to discuss why God appears to be quite stupid to many Atheists. Here is one non-believer's argument.

So God created the entire universe, including the Garden of Eden, and put man and woman in the garden. Then he put the tree of knowledge in the garden, and a talking snake. God told Adam and Eve to not eat the fruit of the tree of knowledge, but then the snake said "Eat the fruit!" to Eve, and she ate it, and then convinced Adam to eat it too. Then God punished not only Adam and Eve, but every single one of their descendants, except the select few who get saved (in a later chapter.)

Although the story is a little confusing, Atheists insist that it demonstrates God's woeful lack of planning. It seems as though God did not really understand what decisions the woman's brain might make when presented with a given stimulus. And this, even though God claims to have designed every cell, every synapse, every neuron, of her brain Himself. To computer programmers, this is like writing a program where you have no clue what it does, or is even supposed to do, then with no testing, you run the program and it fails with a core dump.

If any programmer reading this has ever done what I described, my apologies for implying that you are not too smart. You may have good reason for wanting to write your program like that, or maybe you didn't have time to get it done and tested. Who knows? But I would certainly expect more from God if He was the programmer on this project. I expect Him either to know what the program will do, or to run a little test just to see what would happen first without plunging humanity into endless hellfire.

If you don't understand computer programming, maybe a more human analogy would make more sense. A parent makes a nice treehouse for his two little kids. He puts them in the treehouse with a loaded revolver and says "Do not use that revolver", then leaves them alone. Most normal parents would call that parent stupid, evil or deranged. Not hyper-intelligent.

The story of the Garden of Eden is not the only one where God comes off looking like He is not thinking a lot. What about Noah's Ark, where God drowns over 99.9% of all living creatures, including Humans, because they didn't meet his expectations, and then within a few minutes (not even hours or days) of the end of the world-wide flood, things are right back to being just as bad as they ever were. Eventually He has to send His only Son down to straighten out the mess, and He gets crucified. For the next 2000 years, Christianity splits into a thousand or more factions warring against each other.

OK, so it seems that God, to our limited human intelligence, appears like a mystical Kim Jong Il. But to explain why smart Gods make stupid choices, we are frequently told that humans are just too stupid to be able to appreciate His mysterious plan. That's true, I suppose, but if so, I am not the only one who thinks God's plans don't work very well. Apparently God thinks so too. And He should know better than me.

I have an idea of a way to settle matter once and for all if God is a Genius or a compete idiot. I will challenge God to a simple game of chess. Here is how it works. I set up the chess board and give God white, let Him make the first move. In order to get the moves from God, I would have to go through one of the people who God speaks to directly (God does not speak directly to me, that's for sure). Maybe someone like Pastor Terry Jones of Dove World Outreach, or just about anyone with a direct line to God. All that person needs to do is get the next move directly from God, and send it to me.

A few ground rules:
-Any side that gives an invalid move, will be disqualified, infinite intelligence or not.
-I am allowed to consult with any human for my counter moves, that would not be considered cheating, as Humans are all less intelligent than God.
-We are using the honour system to prevent cheating. i.e. if I use witchcraft or voodoo, or God uses a computer to make His moves. Either one is cheating.
-No specified time limit, but God gets disqualified if He makes me wait until I die of old age to give me His move.
-Any lightning, plagues, floods, earthquakes, or tornadoes that interrupt the game will result in disqualification of the side causing the disruption.

So, if you, or anyone you know has a direct line to God, and wishes to demonstrate God's infinite intelligence, please send me the first move for God's side, leave it in a comment below.

Picture: found it in several locations on the Internet with no source given. I guess it's public domain.
Copyright the Lost Motorcyclist