Who is Killing the Anti-Hosni Mubarak Protesters? 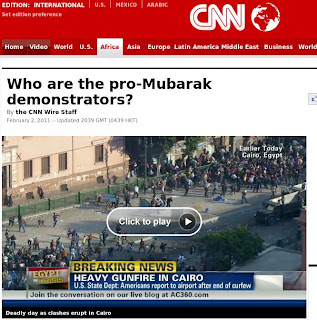 Egypt is in a period of conflict right now that started a couple of weeks ago. Thousands of people are in the streets demonstrating against the president Hosni Mubarak. Many people have been injured, and some killed.

Whenever you have violent conflict, you also have confusion. To give an example, recently there was a political gathering in Tucson, Arizona where a lone gunman appeared, shot Democratic representative Gabrielle Giffords in the head, then proceeded to shoot and kill several other people gathered around, until he was subdued and taken to jail. In the days that followed, everyone tried to make some sense out of what happened. Some claimed the killer was nothing but a mentally deranged person killing randomly. Others claimed it was a right wing gun nut trying to assassinate a liberal political figure. Yet others claimed the gunman was a pro-Democrat left-wing liberal according to the books in his reading list and statements he made on Youtube. The debate rages on even now.

Until now, the conflict in Egypt was simple. People in the street are assumed to be against Hosni Mubarak, I guess they want him to step down. Police and secret agents want him to stay in power. The army seems neutral, just following orders but not wanting a massacre.

Yesterday, things in Egypt got confusing. Thousands of armed, horse-mounted Mubarak supporters flooded into the streets, killing some Anti-Mubarak supporters. The question is, who are these pro-Mubarak supporters? Some Egyptians claim they are nothing but the secret police in plain clothes, following Mubarak's orders. Some of the Pro_mubarak supporters were found to have Police ID badges. But the government claims that all those badges are fakes, that no police are participating in the "peaceful" Pro_Mubarak rally. What is the truth?

I noticed something a bit strange about the Mubarak supporters. They call themselves "Real" Egyptians, kind of like conservatives in the USA who call themselves "real" Americans. I'm not saying there is any connection, other than the choice of rhetoric.

Supporters of Mubarak, who had been largely silent since the unrest began, came out in full force Wednesday -- in one case wielding whips and thundering through the crowd on horses and camels.

Is this Pro_Mubarak rally a genuine grass roots movement? If pro-Mubarak supporters really are killing anti-Mubarak supporters, then that's just one more reason to get rid of Mubarak. But if the killers are just crazy people, then Mubarak is not to blame. If we go by American logic, one way to find out would be to examine the books that the Pro-Mubarak killers are reading. For example if they are reading "The Communist Manifesto", "Animal Farm", or "Mein Kampf", we can assume they are pretty much like Jared Loughner, the shooter in Arizona. (i.e. left wing liberal, definitely not a right wing gun nut.)

But I seriously doubt that any Egyptians care what books are being read by these killers. In Egypt, I guess they like to keep things simple. If you kill an anti-Mubarak protester, that automatically makes you a pro-Mubarak supporter. What you say or read is unimportant compared to who you are killing. I sometimes have to admire that kind of clear thinking.
Copyright the Lost Motorcyclist