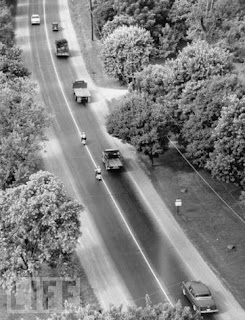 We ride our motorcycles on many different types of roads. One of the least exciting of course is the freeway, but there are some compensations for riding on a freeway (like safety). Another boring type of road, whose redeeming qualities are few or none, is the old fashioned, heavily traveled two-lane road, with two way traffic. One example around here is highway 24, Paris to Simcoe. Long and fairly straight, no passing lanes, and lots of cross roads and driveways. And very busy almost all the time. I have several alternate routes, but let's face it, Highway 24 is the shortest distance between two Tim Horton's.

I have no problems with lightly traveled two laners. But on a long stretch of two-lane (i.e. more than ten kilometers), that also has a lot of traffic, I get stuck behind lines of cars all moving slower than I want to. Being stuck behind a line of cars means I have to pay a lot more attention to the traffic in front, and I don't have any time to look at scenery. Also, I start to get traffic coming up behind, possibly tailgating, occasionally trying to get by me.

The two lane road does not allow easy passing, like the freeway does. And if it is busy, often that eliminates most passing opportunities for me. And with this volume of traffic, there will be police patrols on every corner.

Fortunately there are some ways to cope with these roads. One way is to slow down to a point where you do not come up behind the slow moving traffic as much. However, if the road is long enough, a slightly faster moving group of cars will come up behind you, and you will end up in the middle of a parade. Hopefully by then you will be needing to stop for gas anyway.

Is it safe to pass a long line of slow moving cars? Remember, not all of those cars want to be slow moving: only the first one. Strung out behind are an assortment of cars, some waiting for an opportunity to pass, some who will never pass anyone. Ever. When you try to pass, you may find another car pulling out to do the same, that might force you off the road. To avoid having that happen, I often wait a bit when I see a long straight open up. Then if nobody makes a move, I will pull out. But guess what? There are more drivers than you would ever imagine, who don't start to pass at the beginning of the long straight. They wait, maybe for the same reason I do, and then pull out. So if I'm passing several cars, I try to read the situation ahead of time, and watch carefully as I approach each car to see any signs of pulling out. In case you haven't got it by now, use of signalers is very rare.

Here is another situation. As you go to pass, one of the cars in the line may turn left into a driveway or onto another road. So it's not good to pass a line of cars through an intersection. In most places, intersections are marked as no passing zones, but not always.

When you are patient, there are things that can happen. The lead car or truck may turn off or stop for gas, and suddenly everybody can go faster, and spread out more. One or more of the cars in the middle may pass, shortening the line for you. A passing lane may open up, giving you a better chance to get by. These are usually signposted miles ahead. And if you are not patient, remember this. Passing a lot of cars saves you about ten seconds per hour. It's not worth it. Every time you pass one group of cars, you simply come up behind yet another group of cars. And possibly a more annoying group.

I should mention it's very easy to get a speeding ticket passing cars. That's because you are not supposed to exceed the speed limit even while passing another car. That seems dangerous to me, but that's how the laws are written in most places. And don't think that no cop would be so unreasonable to write a ticket. The way it was put to me was "The truck you were passing was doing the speed limit!" I should have said "He sped up as I was passing him." but I didn't think of it till a few miles later.

Overtaking is dangerous in a car, even more than with a motorcycle. In case of a head on collision, the car with air bags and seat belt may work better than flying over the roof of an oncoming car after hitting it with a bike. But a bike is smaller, and if you keep cool and collected, you can pull back into your lane into a small gap between the traffic, or possibly squeeze between the oncoming cars. This of course (of course!!!) is not recommended. It's just better than ramming an oncoming car. No matter what you do, you should always be thinking of escape routes. Another example of an escape route: If there is a rear end chain reaction collision in the cars up ahead, where they all crash into the back of the car in front, you may want to head for the shoulder. That's because even if you can stop in time, maybe the car behind you can't. And that's also another reason to leave a bit of extra space when following. But don't hit the shoulder until you have almost stopped. A far better plan is to brake hard early, to warn the car behind, then ease off the braking as you come closer to the stopped car in front. If you have left enough space to do that, you are probably safe. But if you find yourself squeezing the brakes harder and harder as you approach the car, I would say your chances of getting hit from behind are much higher.

Picture: Motorcycle police patrolling two lane road in 1958. From http://www.life.com/image/82500716 They don't do that any more!!!!
Copyright the Lost Motorcyclist