Finally, Going for a Motorcycle Ride 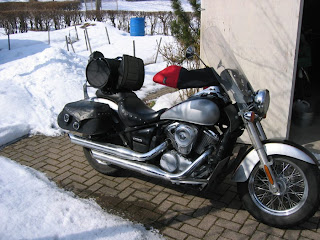 This morning, I found a good rider backrest pad for my luggage roll. It was at Wal-Mart for $15. I normally avoid Wal-Mart to spare Mary Ann's feelings, but this morning I wanted to take a walk for the exercise, and Wal-Mart was the right distance for me.

After walking home, I chopped the ice away from the garage door and fit the backrest on the bike. Soon after I decided to test out my new backrest, and for that I had to take the Vulcan out for the first ride of 2011. Although there is still a lot of snow, during my morning walk I noticed that the streets were mostly bare and dry, and the sun was out with a temperature of 0c. I usually try to go out for about an hour, on these early springtime rides, to recharge the battery and to get the engine hot.

I forgot to put in my earplugs. That's because my last ride was back in November 2010, and I got out of the habit. I stopped at a mall parking lot, put in some spares (I always have spare earplugs), and I continued on to Stratford, using a route that had a minimum of wet roads. I did go through a bit of water at a roundabout, so I slowed down quite a lot for that. Roundabouts are very slippery at this time of year. The rest of the road to Stratford was dry.

A one hour ride at this temperature, and in the sun, does not require an electric vest. When I got back home, I was only starting to feel a bit cool. The main problem is that on a bike you are sitting still, which lets your metabolism slow down after about 40 minutes. When skiing, you are moving your body enough to generate some heat. Even when snowmobiling, you generate more heat than on a motorcycle, as steering the skis and leaning the snowmobile needs a lot of muscle activity compared to motorcycling.

So first ride over, lots of good riding days still left in 2011.

Picture: Just before the ride, with the backrest mounted on the luggage roll. Almost looks like it cost more than $15.
Copyright the Lost Motorcyclist