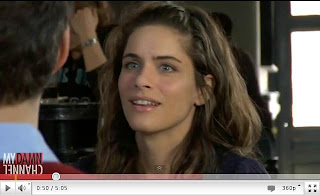 Amanda Peet is an American actress.

What caught my attention was a youtube video posted where Howard Stern blasted her for several full minutes. After listening to the rant, I was curious as to the reason or the context of the rant.

Early on in the speech, Howard says "They go on there and they clearly have nothing to talk about". An ironic statement, in my opinion.

In case you don't know who Howard Stern (the radio Shock Jock) is, http://en.wikipedia.org/wiki/Howard_stern.

"In May 1987, Stern recorded five television pilots for Fox when the network planned to replace The Late Show hosted by Joan Rivers.[65] The series was never picked up; one executive having described the show as "poorly produced", "in poor taste" and "boring".[66] Stern hosted his first pay-per-view event on February 27, 1988 named Howard Stern's Negligeé and Underpants Party."

"In February 1991, Stern released Crucified by the FCC, a collection of censored radio segments following the first fine issued to Infinity by the FCC over alleged indecency.[69] He released a third video tape, Butt Bongo Fiesta, in October 1992 that sold 260,000 copies for a gross of over $10 million."

Now why does he take offence at Amanda Peet's appearance on Letterman??? It seems that his own beautiful model wife appeared on Letterman earlier, and didn't do so well. So Howard decided to attack another person appearing on Letterman and Amanda Peet was at the wrong place at the wrong time. For one, apparently her parents were rich. Obviously that would not be enough for a rant like this, lots of people are born rich, and I don't hold it against them. I don't even hate Howard for making $10,000,000 of "Butt Bongo Fiesta". But the key point for Howard was when Amanda got into a fit of giggles and could not clearly state the concept of the movie she was promoting at the time. When Letterman asked her to set up the clip from the movie, she said "Now sell, Amanda, sell" and "Clearly I don't belong here". Then got into a fit of giggling, where Dave tried to fill in the background for her. So actually in a way I kind of see Howard's point, that she did not do a very good job of "selling" the movie.

But here is the point of view of a guy who lives in a more real world than Howard Stern. In Howard Stern's world, famous movie actresses take off their clothes when he tells them to and act out his fantasies on TV and radio. This, so far anyway, has never happened to me or anyone I know. I personally would be OK with being in the same room as Amanda Peet, and if she were to giggle uncontrollably at one of my jokes, I would not be offended. Even if the giggling was totally fake. And I bet a lot of guys I know would be the same way. But then I never have been paid ten million for doing a tape called Butt Bongo Fiesta, either. So my standards are pretty low.

Now let's assume I am the typical guy going to see a movie. How do you, as an actress in the movie, sell that movie to me? Well for starters, forget about telling me that the movie is about "An old Grandmother that people are waiting for her to die so they can get her apartment." There is no way you can say that to make me want to see that movie. On the other hand, if Amanda Peet is fun to watch on Letterman, and is laughing and maybe a little nervous, I might be tempted to go, especially if Mary Ann (who would never want to hear Howard Stern in a million years) want to see it too.

So I have watched Amanda Peet in a few movies, example "Saving Silverman" where she is truly a quite unlikeable person, and maybe Howard is confusing her character onscreen with her own personality. Or maybe she refused to appear naked on his show. Or maybe something else set him off.

Howard makes his fame by saying whatever comes into his mind, and his combination of profanity laced, hate filled rants, mixed with his profanity filled sexual musings seem to appeal to a lot of Americans, and many Canadians too. But I would not call it "having something to say" as much as it is simply pushing the boundaries of good taste. On David Letterman's Late Show, you have to appeal to a wider audience, and do it with taste and style. It seems to me Amanda Peet is about as entertaining as anyone, and way more entertaining to me than Howard Stern's own appearances on the talk shows to promote his satellite radio network.

Here is the offending video, (Peet on Letterman) and the selling of the movie starts at 4:40

And as a counterpoint, here's Howard's wife on Letterman, probably the original trigger for Howard Stern's hate filled rant. Somehow, Howard does not come off sounding as good as he thinks he is. Anyway, that's what I think. His wife also happens to look a little bit like Amanda Peet.