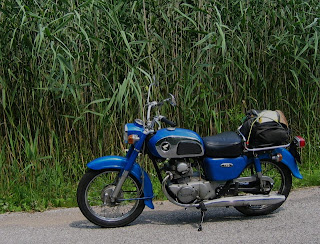 I am wondering if short, local trips can be as interesting as long trips to faraway places. I am going to qualify that as motorcycle trips, because that's the kind of trip I like the best.

It's easy enough to say "it's all in the mind", and you can be just as interested by any place you go, near or far. While that's true enough if you can convince yourself, what does it sound like to other people you talk to in everyday life?

I like to hear about travel stories, and I like telling my own stories when the opportunity arises. I have found a few websites on the internet that have collections of motorcycle adventure stories, such www.Advrider.com. I can spend quite a bit of time reading through these stories, even though they are typically amateur efforts with no professional editing (like a published book or magazine might have). I also have to wade through quite a bit of back and forth commentary by other forum members, and although that's not too bad by itself, some people repeatedly repost the same pictures and text along with their replies, and sometimes have very little to add to what has been said (except for their long rambling signatures that tend to resemble the Gettysburg Address.) After a while you sometimes feel like it's hard slogging to follow the original story. 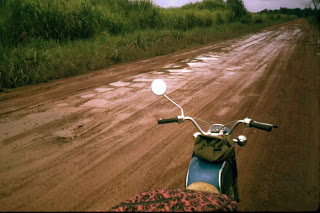 I don't mind telling my own motorcycle travel stories. Occasionally I find a person who has some interest. But most of the time it's not something other people are interested in, even for other motorcyclists. Travel is a broad topic, and most people are not that interested in adventure travel. I think it usually comes down to "Where are you planning to go, or where have you been recently?", to which you name the country or whatever, and the other person says "Been there, nice place." (or) "Need to go there." (or, more rarely) "My God why would you ever go there???", and the conversation is over.

I'll admit I am a bit like that myself. I like to hear stories especially about places I would like to go, or have been to. I prefer to hear about places further away or more difficult to get to. Although I have a little more patience than the average in hearing details about the trip, I also sometimes find travel stories a bit boring.

While most people are probably not interested in how you hacked your way through the Darien Gap, I can assure you there are even fewer who want to hear about your trip to Simcoe, Ontario. Well, not just Simcoe, any place less than 1000 km away is thought to be unworthy of telling about. So in that way, local trips will never be as inherently interesting as longer trips, barring some kind of amazing event, like being abducted by aliens in Burford. The fact that Tim Hortons' in Port Dover has a new kind of donut will bring only the slightest spark of interest, probably feigned anyway. Even if you are the most amazing, hypnotic, mesmerizing story teller.

But do many people pay any attention to the different birds and plants? There are birds right here in Ontario that are pretty amazing, if you happen to spot them. Granted, most people can tell a saguaro cactus or a palm tree from a pine or maple. Other than that, knowledge is a bit thin.

What about landmarks like the Eiffel Tower or the Statue of Liberty? Mostly I just look at them and try to take a picture like the ones in the post card, except with me in it. Increasingly this is possible in Photoshop without ever visiting the places.

What a lot of people really like about travelling, if they would admit it, is not having to prepare meals (Obviously I'm not talking about campers and motor homers.) And the excuse to do something stupid: "I need to do this, because I'm on vacation!". Well there, I can assure you that you don't need to leave the country to go to restaurants, even Mexican ones, or to do something stupid. Although, if you desperately wanted to stick your arm in a shark's mouth, you may have to go south for that experience. And if you do end up in jail, you can't beat Canada for a warm, welcoming experience.