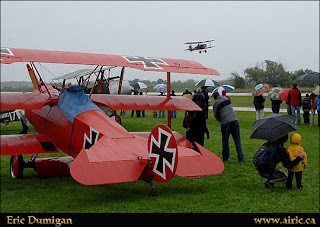 Today "The Lost Motorcyclist" visited the Annual Brampton Air Show. Actually, calling it an Air Show might give the wrong impression, because it is different from the well known Air Shows that are staged at the bigger airports all over Canada and the rest of the world.

The first difference is that this is more like a flying museum. Or should I say, like an aircraft museum where the airplanes actually fly. The Brampton Air show is an annual open house event at the Brampton Flying Club. For $5 per person, you can wander through their extensive museum, and also look at airplanes that have flown in for the event from other flying clubs.

The result is an extensive array of World War 1 (and I saw one WW2) air planes. Some are parked on the ground, some are flying, landing and taking off. Some of the planes are scaled down replicas (some are 7/8 or some may 3/4). Most have upgraded engines for flying purposes, meaning a modern Lycoming engine - however many have more authentic looking radial engines. Again, these may be more modern versions, but I was not able to tell exactly what had been done to get these birds to actually fly.

Some of the other interesting points: For $40 you could fly in an open cockpit biplane. There is also an informal antique bike and car show, I saw several interesting bikes - particularly an old Brough Superior. There was a power boat on a trailer that was being fired up, and I didn't get a chance to find out what kind of engine it had, but from the look and sound of the exhaust I'm guessing it was either a rocket or a gas turbine. There was a very small twin engine airplane. Each engine was a one cylinder, two stroke engine. The whole plane looked like an overblown radio controlled model, except that I was told it had a human pilot in the cockpit.

I didn't see this, but I was told that at previous shows they had staged such events as a biplane bombing a vintage motorcycle/sidecar with sacks of flour, while riding/flying across a field. I would not be surprised if it was cancelled because of ever-tightening insurance restrictions on these airshows.

I visited the show on my motorcycle, with a few friends also on motorcycles. Afterwards we went for a motorcycle ride on the very scenic roads near the airfield, including the Forks of the Credit road. That road is only about 10 km, but it has the sharpest corner "The Lost Motorcyclist" has ever seen. I suppose somewhere on Earth, somebody may have figured out how to make a corner sharper than that, but I can't believe they would do it on a regular width paved road, while climbing a fairly steep hill.

Next we went by the Cheltenham Badlands, or "Clay Hills", which looks a lot like the badlands of South Dakota except much smaller.
http://www.ontariotrails.on.ca/trails-a-z/cheltenham-hills/

So that was the end of the motorcycle trip. Except that we still had to drive back to Kitchener. Normally I would just hop on the 401 after a tiring day and get home in the shortest amount of time, but Mary Ann wanted to avoid the boring freeway, so we took about twice as long and were really tired when we got home. But this time at least I didn't get caught in a downpour.

Picture: From the club's website. They apparently had rain that year. We had sunshine all day long, while thunderstorms produced hail and rain to the southwest.
http://www.bramptonflightcentre.com
Copyright the Lost Motorcyclist