Bikers Guide to a Part of Toronto 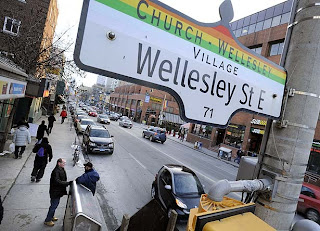 The weather was perfect for a motorcycle trip, and because "The Lost Motorcyclist" has not done a ride to Toronto for a long time, I decided to go down there with the main aim of finding an outdoor patio for lunch, with motorcycle parking right nearby. Ideally, this parking would be at the curb, because in Toronto curbside parking is free for motorcycles.

I decided to wear my half helmet, because it would be better riding in downtown Toronto. And even though it doesn't match the helmet, I wore my lime flourescent green visibility jacket.

It is actually a very short trip to Toronto from Kitchener, if you stick to the 401. But if you go backroads you can take all day. I arrived there about 12:30, after taking a few back-road short cuts along the way, but I arrived on the Gardiner Expressway, which is a raised freeway along the lakeshore coming in to Toronto. I have done this route many times before, but I have never seen so many new tall buildings. You almost can't see the usual skyline any more from the Gardiner.

My chosen exit was Yonge Street, likely the most well known of Toronto's busiest streets. By "busy" I mean with people walking, more than with cars. Streets are far more interesting where pedestrians outnumber cars about 50 to one.

I have never yet found an outdoor restaurant with parking in Toronto, so this time I decided to try something a little different. At Carlton Street (just after Dundas) I made a right turn off Yonge, then a left at Church. Church Street had just what I was looking for. It was not too busy, some motorcycles parked at the curb (leaving place for me to park beside them), and many outdoor patios on both sides of the street. I saw one motorcyclist leaving his parking spot, so I U-turned and backed into the spot next to him. Then I turned around and looked for the right outdoor patio. There were four right beside each other where I was parked, and I decided to take the one closest to me, which was "Just Thai". I would leave my jacket and helmet on the bike, and keep an eye on it from across the sidewalk.

As I peered inside into the dark, I saw that this restaurant violated two of my most sacred rules for restaurants. One it had cloth napkins. Two, there were no customers. But just as I was removing my sunglasses, I noticed a smiling and friendly waitress, which convinced my I might as well stay and try it out. After all, I had the parking and the outside deck, which was a first.

I sat outside and ordered my meal, and started taking pictures of the streetscape. First I had to wait for two men who were greeting each other over enthusiastically to break it up, so I could take a picture without it looking too gay. Now if you happen to know that this stretch of Church Street is known as the "Gay Village", don't spoil it for the rest of the readers, and remember I've never been here before so I don't know either.

Well, to continue. I got a really nice meal, and a few individuals plus another couple drifted in after me (although I noticed it was all men, and no women). After the meal, I paid and went across the street to take a picture, and I did notice the bar across the street had a rainbow banner hanging in the window, I figured it was a decoration for the Gay Pride parade. And just as I put my camera away, a guy rode by on a purple scooter wearing a purple metallic cape which was billowing out behind. I thought "If that's how you are trying to not look too gay on your scooter, it's not working."

Picture: Just grabbed off the internet.  I did not notice any street signs with rainbow colours, but it's more interesting than the pictures I took.