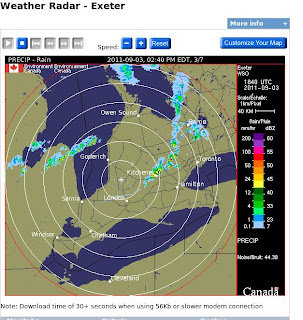 This morning, the weather forecast said there was a 40% chance of a thundershower this afternoon. With that information, I decided to go to Port Dover in the morning and return before the thunderstorm. However I wasted a little too much time on my trip, and got caught about 5 minutes before I reached home.

I had penty of warning that I was going to get wet. On the way to Port Dover, I got caught in a little shower caused by a farmer irrigating his field with a water cannon, but he missed an got me wet instead. It was OK, because although I was only wearing a t-shirt, with the 35c temperature and the sun, it was a welcome cool off, and dried almost immediately.

In Port Dover, the Lost Motorcyclist (me), heard a lady yelling to her friend that there was a severe weather warning, but that she didn't see any rain on the radar and so she didn't understand what they meant. Yes I know that's a lot to yell at a friend standing across the road, but some people just like yelling. Anyway I resisted the urge to explain to her that the two were perfectly compatible, and made a mental note to hurry up and get home, but not before stuffing an apple fritter and ice cream down. Once I finished my traditional stop at "Apples", I got on the bike for the ride home. It was still sunny and very hot, and I was wearing the t-shirt and half helmet and jeans.

By the time I was almost home, about 15 km to go, I decided to stop at the convenience store in Glen Morris and drink down a large size Gatorade. I had actually passed the turnoff, and made a u-turn to go back, on the theory that something interesting might happen there, and I could not afford to miss whatever it was.

The cafe/convenience store/gas station was empty except for a tired looking woman chipping ice out of a stand-up freezer. I grabbed my favourite puke-green coloured Gatorade and she came over to ask for three dollars. But she told me that it was warm, and if I wanted a cold one (of course I did!) to pick one of the other sickly colours. So I picked puke-yellow instead. Just then the owner walked in, and so did a thirsty bicyclist looking for a bottle of cold water. The water also cost three dollars, and the ensuing discussion (which eventually involved me) covered these topics: Why did the 1 litre of water cost three dollars when there was some convenience store somewhere that would sell the same thing for $1??? Why Gatorade was bad for my health. How much of the price of the bottle of water went to taxes for Premier McGuinty, and how was he destroying this country with those taxes. How much cheaper you could get cigarettes, gasoline, and yes, even water, on Indian reservations. The stated fact that the cyclist was half Indian, and had his Indian card which permitted him to buy cheap gas with no taxes at the reservation. He then left, and the owner of the store then confided in me that the main reason Canada is going to hell in a handbasket is that no one is willing to stand up and fight for our rights. At which point I tried to clarify which rights we need to fight for, the right to not pay taxes? After all if I am going to lay down my life in a suicide bombing attempt in order to save Canada, I needs to know precisly what the problem is.

The whole discussion plus big bottle of Gatorade didn't take more than 15 minutes, but my fate was sealed. As soon as I turned the bike toward Kitchener I saw heavy dark clouds ahead indicating rain. But it was still sunny and maybe more than 35c (95 deg. F, I think) so I didn't put on my jacket and rainsuit. But then out of the blue, no more than 6 km from home I got hit by a giant water drop. Then another, and I could see a wall of rain on the road up ahead. I pulled over to a parking lot and went to open the saddlebag to get my jacket out, OOPS wrong saddlebag! But before I could get to the other side, I got soaked completely through with cold water. I figured I might as well put on the jacket anyway for warmth.

By the time I got the bike started and ready to get back on the road, I could see nothing. Just then I could make out two orange lights flashing, apparently a car had simply stopped on the road and turned on its four way flashers because they couldn't see to drive any further. Great, I thought, and merged on to the road. Next I was looking for the traffic light at Manitou, but couldn't see it in the heavy rain, although I did pass another stopped car at the intersection also with it's four way flashers on. I figured the traffic lights must have stopped working because of the storm, but as I reached the intersection, I barely could make out the green light, so they must be still working. I went through, but the rain was still coming down in buckets, so I turned off at Huron Road and Homer Watson to stop under the overpass for shelter.

Although it was quite a relief to get out of the rain, I was soaked through and a little bit cold. But I had one more problem. Ever since my prostate operation on July 6th, I have had this almost unstoppable urge to pee when I hear a water tap turned on. Well apparently my brain thought it heard a water tap turned on, and with the 750 cc of Gatorade in me, I had to go. So I went back out into the rain to pee in the tall weeds. Then five minutes later, as soon as it began, the rain stopped and the sun began to shine. So I drove home kicking up a huge bow wave through the flooded areas on the street, and when I put my boots on the ground at a traffic light, I could see the water rushing over the toes and around my ankles.

Picture: Frame grab of the Exeter weather radar at the precise moment the rain hit me.