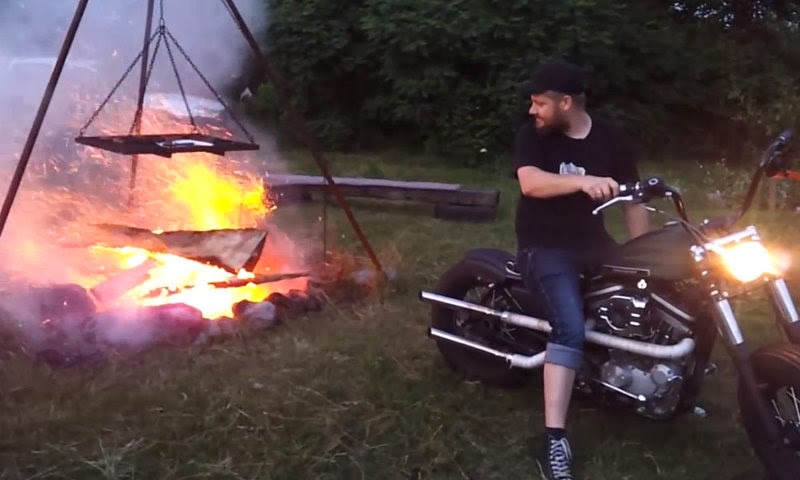 When I was growing up in Baie Comeau, we did not have all the rules to protect me that I now enjoy. And one of the things we used to do was start campfires.  I actually had some training in campfire building, so I suppose there was no real excuse for some of the things I did.  I guess I will start with the worst, and actually it didn't turn out too bad, as I did not burn down the entire town.

I decided to start a campfire in the forest near town.  Sounds bad already doesn't it?  Especially in Baie Comeau, a small northern community surrounded by combustible forests, which was nearly evacuated in the early fifties due to a massive forest fire that came within a couple of hundred yards of the house I grew up in.  And I guess I have doubly no excuse, as my father was a forest fire fighter, and I was in the Boy Scouts.  And the road leading out of town into the bush had one of those huge fire danger warning thermometers on it.  I didn't see it that day, as I built my fire inside the town limits.

So me and a few friends were stoking up this fire, which I didn't realize was right under a big spruce or fir tree.  But after the fire got going pretty good, there was this loud whoosh sound overhead, as the entire tree, probably about 20 ft tall, burst into flame all at once.  I don't remember exactly how we put it out, but no emergency fire crews were involved and the incident went no further.  I guess we must have put out our campfire with water, and then the tree, which was thankfully isolated a bit from the rest of the forest, burned itself out.

Many years later, I had three little boys of my own about 3-6 years old, and we were camping in an Ontario provincial park.  They were poking sticks into the fire, as people sometimes do, and of the sticks began to glow red at the tips.  They started waving them around, and just then a park ranger came by and put an end to this activity.  I think he muttered as he was leaving something about this is the most ridiculous thing he had ever seen.  Well, by my standards it wasn't even close.

Today I was researching methods of starting fires on the Internet, in preparation for our camping trip to Newfoundland this summer.  In particular, I was thinking that maybe I didn't really need to bring a 2 pound axe to make fires.  After all, we are never allowed to gather our own wood at regulation campgrounds.  The wood that is supplied is already cut to length and split.  My only job is to split it down to smaller sticks and supply kindling and a light of some sort.  You can actually do that with a large knife which weighs much less than 1 kg.

While I was watching videos of people using a knife to make kindling, I came across all kinds of interesting ideas.  For example I didn't know that you could use a saw to split wood.  Here's one of many videos about that. http://www.youtube.com/watch?v=lSOXU0rrqOM

I came across a huge variety of ways to start a fire.  Of course the cliched "rubbing two sticks together", which I have never done myself, unless they were matches.  There is another way involving a 9 volt battery touched to steel wool.  The shower of sparks from certain kinds of metal is a traditional favourite. Then of course, matches and Bic lighters.  Those are some of the ways of getting the first flame.  Next is the tinder, or what you set fire to first with the match or sparks.  Here I came upon another revelation.  Vaseline-soaked cotton balls are now very popular for tinder.  I understand why it would work, but when I was young we frowned on using artificial fuels to start the fire.  For example, pouring a gallon of gasoline on the fire would be a no-no.  And actually, I always thought the politically correct way to start a fire was with some birch bark and thin sticks.  What we always ended up using was scrap paper, and often it didn't burn hot enough to start the sticks on fire.  So the fire would flame out, which was embarrassing in scout camp partly because the big puff of smoke signalled everyone else that you fire starting attempt was a flop.  We used to have competitions, where we had to start the fire with only three matches.  If you could start it with one match, it was the perfect fire start, unless gasoline was involved.  But what about Vaseline?  Apparently it burns pretty good, and nobody has to know you are using petroleum products.  Then I found out that Cherry Chapstick works just as well, and so does Purelle hand sanitizer!

So I started to adjust my packing list for this summer's trip.  I may just take a knife instead of the axe, and save 700 grams in my camping bag.  And I'll add a small jar of Vaseline, but no cotton balls.  I figure I'll just poke the stick of kindling in the jar of Vaseline then set the stick on fire with a Bic lighter.

Before I commit to a new way of starting fires, I must first test it myself.  I don't trust my own eyes when looking at YouTube videos.  Luckily Mary Ann was away today, so I could build my practice campfire in the bathroom with the fan on.  I could also go outside in the snow, but that could attract too much attention in a highly disciplined, rules-driven place like Kitchener, Ontario.  So I grabbed some wood from outside that fell during the ice storm, I'm sure nobody will miss it.  I used a hatchet to cut it into 30 cm lengths, about the same as campground firewood.  Then I brought it inside and used only a knife to split it up into small kindling sticks.  I put it all into an aluminum pan, and stuck one of the sticks in Vaseline then lit it on fire and put it in the middle of the pile. After a while, when I was sure the fire was truly started, I doused it with water and cleaned up the mess.  I also threw the burned sticks out in the snow in the back yard.  See, I'm really careful these days.


Picture: How to start a campfire with  Harley.  It's not what I thought (park the bike in a pile of kindling and toss a match in the gas tank) http://www.youtube.com/watch?v=Xxffd2wAn9s