Thoughts About Riding Side By Side 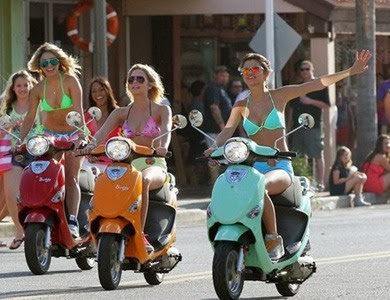 I have had at least two people suggest to me that riding side by side on motorcycles is the best way to ride together (as opposed to staggered formation.)

First I will note:

In BC you are prohibited from riding more than two abreast, but two abreast is OK.
http://drivesmartbc.ca/miscellaneous/topic/riding-motorcycles-and-bicycles-side-side
http://www.pssg.gov.bc.ca/osmv/road-safety/motorcycles.htm

I wonder if three wheelers are officially motorcycles when it comes to riding side by side?  I've never seen two riding abreast.

OK In Australia, but not more than 1.5 m apart, and only in the left lane on a two lane road. (JK, but true also)
http://www.tmr.qld.gov.au/Safety/Driver-guide/Sharing-the-road-with-other-road-users/Motorbikes.aspx

OK IN USA except for states beginning with V
http://www.leaguelineup.com/miscinfo.asp?menuid=39&url=wwamo&sid=874327068

PROS (of riding side by side)
- keep together in traffic, without getting separated by four way stops, and traffic lights
- bigger visual impression on other drivers to make them see you
- Faster for either one to hand signal the other (Unless you have radio communication)


CONS
- No escape path on one side for sudden swerving avoidance
- Requires a much greater level of teamwork and training (Which most riders do not have, although they may think they do)
- sometimes illegal

Suggestion:
Without extensive training, do not ride side by side, except I sometimes get pretty close to it for going through traffic lights and four way stops (Assuming this tactic is understood ahead of time), and that the normal staggered position is immediately resumed.  Otherwise, just ride in staggered formation.

As a rule, I don't do any activity where I must depend on perfect teamwork with another person or we both die:

Exceptions noted:
2. If I'm going to die anyway, and said teamwork is my only hope of survival.
3. This activity is insanely fun.
4. I am going to benefit in some major way from this later.

Picture: I'm not really sure if those girls are exactly side by side, but they are violating a lot of other laws.  And anyway, I don't care that much if they are side by side or not.
Copyright the Lost Motorcyclist