The Mosquitoes, the Tent Pegs, and Newfoundland 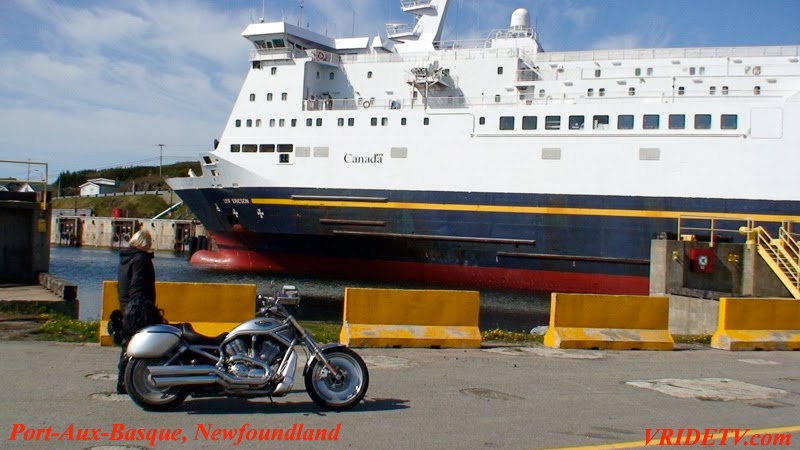 Last night I started coming down with a cold or flu, so I'm cancelling any immediate plans.  Now, with nothing to do and socked in with snow, I will write the first blog entry for 2014.

This coming summer, Mary Ann is trying to persuade me to go motorcycling to Newfoundland.  She has visited the island twice, I have never been there.  I never felt any real need to go, as the flora, fauna, climate and geology is similar to Baie Comeau, where I grew up.  Also she likes to camp in a tent.  I have done some camping near Baie Comeau, with the Boy Scouts, when I was a kid, and it was not too appealing. I imagine camping in Newfoundland would be about the same.  Lots of mosquitoes, and blackflies. And even though there are nice beaches, you can't really go swimming because it is too cold.

Every time the topic of going to Newfoundland comes up, people praise it warmly, saying the Newfoundlanders are very friendly.  They do not mention mosquitoes. Did I mention I hate mosquitoes?  I am still thankful to be able to walk outside in a place like Kitchener, and not be eaten alive by black flies and mosquitoes in the summer.  Funny how other people don't seem to be as bothered about them as I am.

Another thing I like about Kitchener, is that we have a near drought in the summer.  Except for last year, the grass all goes brown for July and August, then revives in the Fall.  This lack of rain is great for motorcycling and camping.  I always had the impression it was much more rainy on the East Coast, but then I checked Wikipedia for scientifically measured precipitation for various locations, and found out I am wrong.  Despite my personal impressions, it rains more in Kitchener in July and August than in Baie Comeau, or [St. John's] Newfoundland.  However the average daily highs are 5c (Celsius) higher in Kitchener.  In Baie Comeau, the lows are also 5c lower, but in Newfoundland it seems that the lows are 5c higher.  So on paper, Newfoundland actually looks like a great spot for camping and motorcycling.  Not as much rain as I remembered, not too hot in the day, not too cold at night.

I am not completely sold yet on visiting Newfoundland.  Many years ago Mary Ann visited "The Rock" by car with a friend.  After getting off the ferry, they set up camp for the night.  The next day, her friend gave up because of the mosquitoes, and they caught the next ferry home.  It was not Mary Ann who wanted to come home immediately, but she does not seem to be as affected by mosquitoes as I am.  I would be more like Mary Ann's mosquito-shy friend.

Mosquitoes do not hang around much in strong winds, so if we restrict our camping to exposed areas near the ocean, I might be able to enjoy the days we use the tent.  I do like the scenery near the ocean, and I don't care if it is too cold to swim.

I don't normally try to camp in windy areas, and actually I have never really needed to set up this tent for wind.  It came with instructions, but did not include the necessary guy lines and pegs to set it up for strong wind, .  I have spent some time in the last couple of weeks researching available guy lines and pegs, and found out this is a much more complicated subject than I ever imagined.

I want to just to give an idea of the complications of bashing in tent pegs in the new world internet forums and specialized camping outfitters.  When I bought my first tent in 1972, it came with 8 plastic pegs.  Those were the first plastic pegs I had ever seen.  I remember at one of our first campsites, I was hammering in a peg with a neighbour kid watching, and she went running off upon seeing the pegs: "Mommy mommy! he's using plastic pegs!!!".   Anyway the pegs were fairly good, although twice they let go, and the tent fell down in a rainstorm with me in it.  Once, the tent was  taken down by my uncle's dog, who was camping with us.  The big Boxer was laying down at the end of his 15 metre long leash, after having circled our tent three times.  Suddenly a squirrel ran across the campsite being chased by a yappy little dog and a larger braying Basset Hound. Gip (the Boxer) woke up and suddenly took off after them, thus wrapping his cord around the tent and then pulling it very tight.  The tent folded like an umbrella, the 8 tent pegs each popped out with a "ping" and they were still falling back to the ground as the tent was dragged along behind the dog until the leash ran out with a sudden jerk.

I guess I'm getting off topic, probably the meds I'm taking for my cold.  Back to the present day.  You have aluminum pegs, steel pegs, titanium pegs. Round cross section, Y section, V section,  Snow pegs, circus tent pegs, sand pegs.  You still have plastic pegs, now some are glow-in-the-dark, so you don't stub your toe at night.  If that's not good enough, some plastic pegs have battery operated LEDs.  Our tent can take about 18 pegs, so cost, size and weight are going to be a consideration.

Finally I started going through some of my old camping gear, and found a stash of cheap metal pegs left behind by my three kids in the years that they used to borrow my tent.  It's hard to believe these pegs are bent by simply hammering them into the ground, some are twisted like corkscrews, other more like pretzels.  Anyway I set about straightening them all out, so save a little money at the outfitting store.

So now that I'm bashing tent pegs in a vise with a hammer, I guess camping in Newfoundland is getting to be more of a reality.  Mary Ann really wants to go, and the more I look at Newfoundland on the internet, the more interesting things I see.  Some of the locations we would like to explore, other than Blow Me Down and Dildo Run: Corner Brook (a paper mill town like Baie Comeau), Gros Morne, Twillingate (icebergs), Cape St Mary (amazing close up of a bird sanctuary), and St John's (Pubs and two of Mary Ann's nieces go to school there).  Originally we thought of going to the French (I mean from France) territory of St Pierre et Miquelon, but finally decided it is too remote, expensive, and the ferry does not take motorcycles.  Or cars.  So this time we'll give it a miss, but we will also be visiting the Gaspe and the Magdalen Islands in Quebec, also PEI and the Cabot trail.  So lots still to look forward to.

Picture:  There are a lot more at this site: http://www.vridetv.com/newfoun.html   Hmmmm wonder why so many pictures on that site look like it's raining.  Maybe because it's in May instead of August.
Copyright the Lost Motorcyclist