Bigger Bikes Have Their Advantages Too 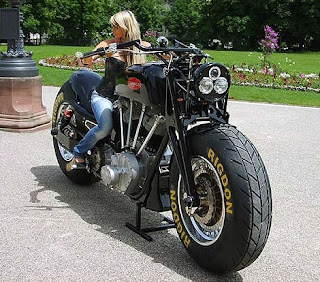 With the arrival of the Gunbus motorcycle, you might wonder if we have now gone about as far as we can go with bigger and bigger bikes. "The Lost Motorcyclist" has the feeling that no, we have not. Because no matter what we say about small motorcycles, there are some real advantages to bigger bikes.

The advantages of bigger bikes may fall into two groups. The imaginary advantages and the real advantages. Lets start with imaginary, just to clear the way. Big bikes attract chicks, carry more weight, are not affected by side winds, are safer, go faster, run over dogs without crashing, and are as cheap and as easy to handle as small bikes. I'm going to stop here, even though there are hundreds more BS reasons why big bikes are better than small. All those reasons are crap, and are only useful to convince your wife that you need a bigger (and newer) bike.

Now for the real reasons big bikes are better. They are harder to lift into the back of a pickup truck, and are therefore harder to steal. They can go farther on highways without needed maintenance. They have more crankshaft torque at low engine speeds, and because of that, are easier to start rolling using the clutch, and without a super low first gear. They are less twitchy on the road, so you can spend more time looking at scenery while the bike goes more or less straight. They often have higher top speeds, and can travel at high speeds more safely (mainly due to larger tires).

Although the Gunbus does manage to look good in pictures from some angles, I'm not sure if these reasons are quite enough to make me want to buy a Gunbus, with its 410 cubic inch (6728 cc I believe) motor. But I would be interested to see one riding down a street sometime during my life.
Copyright the Lost Motorcyclist 2 comments:

Can Higher Speeds Save You Gas? 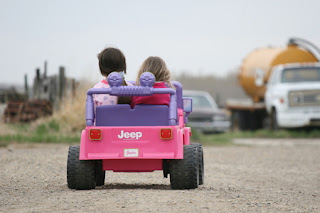 Getting better gas mileage at higher speeds goes against my intuitive understanding, which has been reinforced by many years of experience. Apparently some new research indicates that going faster can save you money at the pumps, that the optimum speed for fuel economy is over 100 kph.

I thought this might be similar to the campaign a few years ago to convince drivers that using a car air conditioner could save them gas. At that time, I looked into it and concluded that it was baseless.

In that blog the Lost Motorcyclist (me) said "Here is another debate pitting science and reason against vested interests and wishful thinking." I found this idea had already been written up in Wikipedia, with references. It was on an entry called "Fuel Economy in Automobiles", subheading "Speed and Fuel Economy Studies".

"The most recent study[16] indicates greater fuel efficiency at higher speeds than earlier studies; for example, some vehicles achieve better mileage at 65 mph (105 km/h) rather than at 45 mph (72 km/h),[16]"


I read the reference given "[16]" and found the graphs and charts started on page 27. The report itself referred to other reports, and so I went back to Wikipedia for another research tack.

Two graphs were also given in this Wikipedia section. Interestingly, each graph seemed to give a completely different result. One graph showing the fuel economy vs. speed of eight different cars, and in every case, fuel economy was better at lower speeds. The other graph was completely different, showing peaks of fuel economy for every vehicle in the range of 50 to 60 miles per hour. The source for this second graph has disappeared. The source for the first graph is available at

There is a possible explanation for this difference in fuel economy vs speed. Years ago, I believe most scientists and researchers were working with cars that had standard transmissions, and were left in high gear during the test. A standard transmission's efficiency does not vary much with speed. However, it seems that now many tests are being conducted on automatic transmission cars, which brings up a whole new set of variables.

But there is another major factor, and that is the gear selection. In the past it was simply assumed that the car would be run in high gear, and that it would not be shifted to a lower gear at lower speed, as this downshift would result in lesser fuel economy. I'm not so sure today that these cars are run in high gear only, in fact the multiple peaks seem to indicate downshifts taking place as the car slows down.


Here is a thread on the Ecomodders blog, debating this point.

In that forum is a link to another blog by "King of the Road" where he has all kinds of mathematical equations and test results from his own vehicles. The results seem to indicate maximum efficiency of 50 mph. But to me the most telling point is later when he answers a comment with

"Yes, those calculations are run based on numbers gathered on (nearly) level ground, with the transmission using whatever gear the engine map assigns in cruise."


Do people really think an automatic transmission shifting itself is not worth mentioning, even with detailed explanation of experimental methods?

My conclusion is that this story may indeed have some truth, but only if you are using an automatic transmission, and the automatic is doing certain things at arbitrary speeds - which to me seems to be unscientific, and yet it also appears acceptable to many people.

I drive a manual transmission, but a few months ago I was driving my mother's car (an automatic with torque converter). I forgot to pick up gas at the last station on the 401, and with the needle on empty, decided to drive the remaining 40 km. to her home on back roads at a very low 60 kph. I don't think her transmission shifted down on me, as it is only a three speed (not the six speeds like some newer cars). I thought for sure at the time I was getting exceptionally good gas mileage, but in her 15 year old Chevy Cavalier I had no instant MPG display like many newer cars have. In the end, we did make it home without running dry.