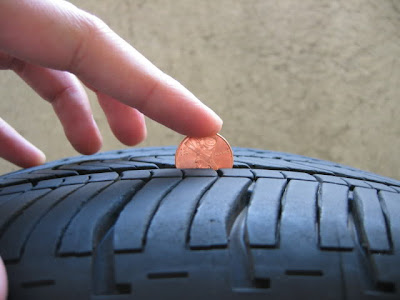 Last week I had to order a new set of tires for my car, which got me thinking about the history of car tires.

What I noticed first, when researching which tires to get, was that the selection process seems to be getting more complicated all the time. When I first started buying tires, you got to choose bias ply or radial. There was no Google to confuse the issue. No Tirerack.com with thousands of tests, graphs, owner surveys, or reviews.

Now a quick history. Most, if not all, car tires today are radial tires. The radial tire apparently was patented in 1915 by Arthur W. Savage, who was most famous for inventing and manufacturing the removable box magazine in firearms. Although apparently Savage also founded a tire company, I could not find any evidence that they successfully produced or sold a radial tire.

The actual mass manufacturing and marketing of radial tires got started with Michelin in France after WW2. I never heard of radial tires until Michelin got into the business of exporting them to America and Canada in the mid 1960's. American companies were slow to adapt, as a radial tire requires a completely different manufacturing process. At first, the big American companies such as Goodyear and Firestone, tried a hybrid tire. Partly radial, partly biased ply, this tire was called the "Bias belted" tire. When the big auto companies started equipping their new cars with radials, Firestone did a rushed conversion which screwed up big time and resulted in the largest consumer recall in US history, as the belts separated inside the tires at speed.

Today we have winter, summer and all season tires to choose from. We also have extremely long life tires compared to the good old days. The tires I am replacing still have a little tread left at over 80,000 km. (I don't know exactly because I also have winter tires.) Tires come in different profiles. Years ago, the tires only profile was 100%, meaning the height was equal to the width. Now we have tires that are flatter and wider than before. My Matrix came with 55% profile, which is a surprisingly low, wide tire for a car that does not compete in Formula 1 races.

Low profile tires are possible with the technology of today, and are very popular on custom cars. The look of wide tires appeals to many men. Surprisingly few women care one way or another, according to informal surveys I have conducted. Another reason the low profile tires are popular is that they allow for a larger diameter wheel. Large diameter wheels can have a dramatic appearance when they are made of sculpted alloy.

Those of us who prefer skinny, tall tires are pretty much out of luck. I am also not too fond of the imprecise straight-line tracking of the low profile wide tires, or the way they tend to aquaplane more easily, especially on slushy roads. But they do grip well otherwise, and the car doesn't feel like you are riding on jelly filled doughnuts when rounding corners.

It took me quite a long time to come up with the tire I wanted to buy, finally picking the Michelin Primacy MXV4. But I didn't come to my decision based on research. I finally decided when I saw the MXV4 installed on a friend's car, a Pontiac Pursuit. Then I found out that last year Consumer Reports rated the tire as the best H rated all-season tire.

Strangely, I bought all-season tires despite having specialized winter tires in the garage. That's because "all season" refers to Florida, not Canada. I could not find any reasonable summer tire other than ultra-high performance types that are stiff and wear out quickly.

The one thing that really bugs me about tires is not the handling or grip, it is how they can start to vibrate after a while. The vibration on the highway is not only annoying, but it stresses the various suspension parts and causes them to need replacement too. And apparently, vibration is not caused just by imbalance (which can be easily corrected), but by suspension wear, and by uneven construction of the tire, or even by belts slipping within the tire during use.

So in the end I decided against getting a cheap tire and worrying about vibration and balancing difficulties, and I just went with a top rated tire from a well known manufacturer. Although even among the bewildering variety of Michelin tires it was hard to pick which one was best for me.

Picture: Not my tire, although you can maybe tell by the US penny. Those penny tire testing gauges are much more affordable now in Canada with our money at par. Also, my old Goodyear RSA's are much more worn than the tire in the picture.
Copyright the Lost Motorcyclist