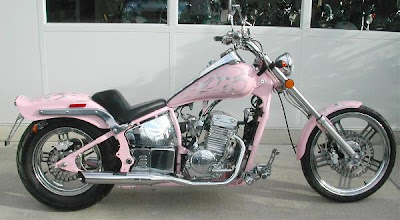 If you thought Flo-Max was a new free-flowing exhaust system, you must be under 60 years old. It is actually a drug called Ratio-Tamsulosin, and it helps with urinating if you have an enlarged prostate. I found that my motorcycle riding was being inhibited by the need to pee about every 90 minutes. I know, in theory I should be able to figure it out, and just keep on motorcycling. But in practice, especially after five years or so, it was starting to be an aggravation I didn't need. Eventually, I found myself basically going to places where I knew there were bathrooms. e.g. my mother's house, or Port Dover in the summer time, or Tim Horton's any time.

When my doctor prescribed a month's worth of Flo-max after my operation in February, I rediscovered the joys of long distance motorcycling. (i.e. over 90 minutes). The prescription lapsed and I was back to short hop riding immediately. So Thursday I mentioned this to my doctor, who commented that since it worked for me, I should keep taking it indefinitely, and wrote another prescription with multiple renewals. This is a first for me, as I am not yet on any regular medication, which I guess is unusual for a person over 60. But the Flow max benefits are so appealing at this point, that it's worth the $22 a month just to be able to do things like ride a motorcycle for 3 hours without a break.

So today, after taking only my second pill of the new series, I rode my motorcycle to see my Mother, about 90 minutes away on the 401. Of course, I know exactly how many minutes to get there, and that is also the reason why I refuse to let Mary Ann drive when we go by car, and why I do considerable cursing at drivers who get in my way. Especially since they are shutting down the rest areas on the 401.

Mom had a few jobs for me to do: take out the garden gnome for the spring, that is made of pure concrete (why don't they just make them of extruded plastic?). Put up a plastic mesh to stop the stupid birds from making a nest in her rain gutter. And attach her outside hose. Normally all these things are done much later in the spring, but wow, what a warm day it was at 25c.

I decided to take the long and scenic way home, along the Lake Erie Shoreline, from Port Stanley to Port Dover. When I arrived in Port Stanley, I was shocked to find the traffic backed up solid both ways through the town. Aha! I thought, it must be the lift bridge that has been up for about ten minutes, causing this backup. But no, it was a combination of a day off (Good Friday), and a temperature 25c, that had been predicted accurately since Monday, giving lots of people ample time to set their sights on going to the beach. The beach was packed with people, many of them in bathing suits. Come on, it only April 2nd, and this is Canada after all. You can see why it might be difficult to motivate Canadians to combat global warming.

I continued on, meandering by Port Bruce, Port Burwell, Long Point, and then I realized my fuel warning light had come on. Wow! This kind of thing never happens to me, but it was because I had just been riding for about three hours without needing to find a bathroom, and hence I also neglected to look at the fuel gauge.

I saw a back road gas station closed for Good Friday. Good thing it was closed, I might have been tempted to try that gas, which had the unappealing name of "Shyte Gas". I headed over to highway 24, and I stopped for gas along with about five other motorcyclists. I guess we all had the same problem. As I was removing my helmet a young woman motorcyclist approached me to comment on my blinding high-visibility jacket. She said, it must help a little with the traffic safety, and I agreed, and she said she was going to buy one, but just the coloured vest, not the whole jacket. It would be a lot cheaper if I had done that, actually. But I do like the Scorpion jacket.

I hit the road once again for Port Dover, and fell in behind an almost equally brightly coloured couple. She had a pink helmet, pink jacket, and an all-pink motorcycle. I actually saw that bike at the motorcycle show, it's the Johnny Pag Spyder, and yes, it comes in pink. He was all in emerald green, with a green custom paint job on his bike. They headed in to Simcoe, and I turned off to Port Dover. Port Dover was full of motorcycles, not as bad as if it had been the 13th instead of the 2nd, but still quite full. The beach was almost as packed as the beach at Port Stanley, but the traffic was at least more reasonable.

After driving around for a while, I headed back toward Kitchener. I have a back road I often take, called Cockshutt road, which goes on for about half an hour before it rejoins highway 24 from Simcoe, and as I got back on the highway I noticed I was right behind the pink and green couple, and don't ask me how I know it wasn't another couple with the same colours.

I could have gone the entire four hour ride without stopping once, if I had enough gas. But my habits got the better of me and I stopped at Tim Horton's in Paris for a break. But next time I have learned my lesson, and I will watch the fuel gauge more closely.
Copyright the Lost Motorcyclist