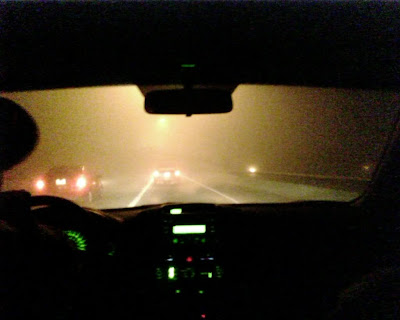 Last night I was coming home on the 401 in the car, it was dark, and there was scattered fog. Recently there have been some changes in Ontario that have made the 401 a safer place to be. The ban on hand held digital devices has given me some confidence, as I rarely if ever see anyone holding a phone and driving any more. And the speed limiter on trucks keeps them all at about 110 kph, and makes for a more orderly traffic flow.

But there is still a problem when we get into patchy fog, because most drivers will slow down to 90 to 100 kph, while the limiters are still set at 110. A few truck drivers will continue to drive at 110, causing a much more confused traffic pattern just at the time you need order the most - i.e. in reduced visibility. First I saw a large truck weaving in and out across all three lanes of traffic, trying to get by the slower moving cars and trucks. Yes, it was only 110, but it was in fog, and the other traffic had slowed down, so 110 was a dangerous speed in that context.

My second observation was right in front of me. After Woodstock, the road crews were painting the road, and had closed the road down to one lane. This happened right where the road normally goes from 3 to 2 lanes even without the painting crew. I guess this situation, which occurred in fog, caught the truck driver in front of me by surprise, and he hit the brakes and clipped one cone, as he tried to merge at the last minute, with another big truck beside him. The other truck also hit the brakes and there was a tense moment before everyone got back down to one lane. Trucks need a lot more planning than a car to merge lanes, because of the length and the inability to change speed quickly. (i.e. the opposite of a motorcycle). At the place where we were confined to one lane, there was a row of cones on the right, but on the left was a concrete barrier with no room to spare. The lesson learned from this is that when a hazard slows things down, the benefit of the speed restrictors is nullified, and it's back to the law of the jungle.

The day before that (Monday) I also rode down the 401, but on my motorcycle. That time it was in sunshine and it was a really good ride. Normally I get a bit tired driving a distance of 120 kilometers on the 401, but on Monday the trip was a little shorter because the traffic was moving quickly. Ever since I traded in my BMW K1100 on a Vulcan 900, I have kept my speed down to about 120 to match the middle lane. With the BMW, I could easily match the fast lane, so most often that was where I went. Now I sometimes find myself keeping up with the fast lane with the Vulcan, and it was actually quite comfortable.

One of the things that kept my speed down on the Vulcan was because of the harshness I felt in the suspension. Since this harsh feeling disappeared when I had my bladder stone removed, I have sometimes driven a little faster than before, and I have found that the rear suspension on the Vulcan actually seems to work better at higher speeds than at lower speeds.

In general, the faster you go, the stiffer a spring you need. I don't have any physics formulas to account for this, I just take it as a given truth. Some motorcycles are made with very soft springs that feel nice when you are driving around a parking lot, but get them out on the highway at 140 kph, and you will be in for some bone rattling surprises. The forces are much greater at higher speeds, and there is less time for the bike to respond to the bumps. There is probably another issue of the shock absorber damping oil heating up and losing effectiveness. Whatever the reason, the Vulcan suspension is actually surprisingly good when speeds pick up and the road is a bit choppy, I would rate it almost as good as the BMW. But at very low speeds, it is stiffer. When parked, you can feel stiffness just by trying to bounce the rear up and down. If you try the same thing with another bike, (like the comparable Suzuki C50) you will feel more movement in the rear suspension.
Copyright the Lost Motorcyclist