How to Stop an Oil Spill (Seriously) 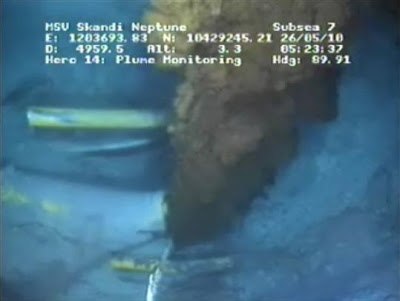 As much as the oil spill bothers me, just for the environmental damage, something else is more annoying right now, and that is the conservatives asking Obama to save them from the big oil spill, and that the government, not BP should not be deciding how to cap the well.

Conservatives are now blaming Obama for not plugging the oil spill. In trying to make the blame stick, they certainly have one thing going for them. The spill is near New Orleans, and so the charge that this is Obama's Hurricane Katrina has some credibility, for people who don't realize that this is not hurricane related.

How soon we forget "Drill, Baby, Drill" which was the Republican mantra in the election campaign.

There is another conservative dogma, that big business can do everything better than the government. It is also forgotten, while they complain that the government should be in there telling the oil companies how to cap the well. I have never believed that private enterprise was always better than government, but even I would leave this one to the people who know how the oil rigs work, and they are the oil companies.

I think that neither the Democrats or Republicans would do a good job of plugging that well, and maybe the only solution is to let the oil companies try. I don't like the idea that the oil companies are failing, and have not tested some of these emergency methods, but there is nothing worse than somebody interfering in an emergency repair effort. Doesn't everybody know that already? Let me make it more clear. If your wife was undergoing life threatening surgery, would you run into the operating room to yell at the doctors and tell them what to do and how to do it? If you answered no, you are just like me. I would not go in there myself, and I also would not send the government in there to "help out".

Even though people are getting frantic, it is best to let the experts solve the problem. Do not panic and make things even worse.
Copyright the Lost Motorcyclist