Zen and the Art of Traffic Gridlock 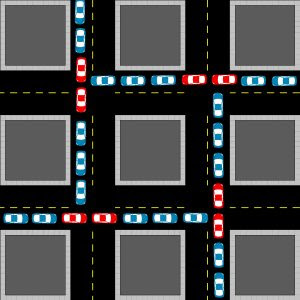 Most people think they know what gridlock is, but I want to go over it again because it happens to highlight one of the most important principles in civilization, and if we could solve gridlock, we could solve any human problem.

Lets start with the basics. In a crowded city, such as New York which happens to be laid out in a grid, traffic will occasionally come to a complete halt in a feedback chain reaction. Imagine a city block which has an intersection at each corner, when traffic is very heavy. Now imagine what happens at one of those intersections when the light turns red, but some cars are stuck in the intersection and cannot move forward or back. Now the cars with a green light cannot move either, because of the cars in the middle of the intersection blocking their progress. Immediately, more cars become blocked behind them, and if the line stretches back to their previous intersection, then that one also becomes blocked the same way, and the chain reaction will now occur in all four corners of the block. And with one city block completely stuck, neighbouring blocks will also get stuck the same way. That is what we call gridlock. 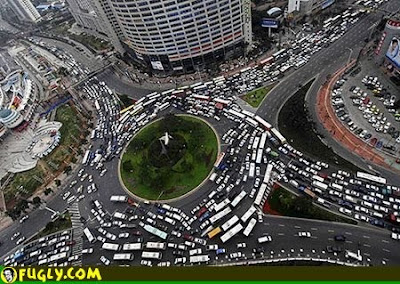 In principal, gridlock can happen in places other than a grid, I have seen pictures of gridlock even in a traffic roundabout, where a line of buses in the circle may block and exit to the roundabout, when they get stopped by slow traffic, and the feedback loop quickly travels back around the entire roundabout to lock it down solidly. These traffic jams are apparently very hard to break up.

The root cause of gridlock comes down to human nature. Each independent driver is trying to get through the traffic as quickly as possible. So they may make a decision which superficially may help them get a head a little further. But their decision blocks another driver, and the feedback from that eventually blocks the entire traffic flow for the whole city. The psychology of this is very interesting, because even if you explain to each driver how to act in order to ensure the free movement of traffic, they will continue to behave in such a way as to move themselves ahead of the rest, which gridlocks the traffic, where they themselves will be stuck for hours.

So if I may define the gridlock mentality as one where a person will make some small action to serve themselves. seemingly at the expense of only a few others, but the the effect on the others multiplies around in such a way that it brings down the whole system, including the original perpetrator.

The solution for gridlock is for drivers to not move ahead if doing so will block the cross flow of traffic. After all, the cross flow is not really competing with you. Those divers are not trying to get ahead of you, they are just going their own way, but need to cross your path to get there. You must not enter an intersection even on a green light, if there is no place for you on the other side. But it is hard to get everyone to understand this is the problem. In other words, moving ahead is not always wise if you want to keep moving ahead.

Politics, economics, and war also suffer from gridlock mentality. This is the kind of "self interest" that gives a temporary advantage to one person while starting the chain reaction that brings down the whole system for everyone. Think of the big banks, that get spooked by bad economic news, and withdraw their loans to protect their own interests, which shuts down those borrowers' businesses, which in turn lay off employees, who in turn withdraw their money from the banks, thus driving the banks out of business anyway. The circular chain reaction always comes back to the starting and then spreads further.

This gridlock mentality applies to a military occupation, where soldiers are torturing and killing innocent civilians to get information, the negative effect of which multiplies to more civilians turning against the occupiers until they finally have to give up. A small advantage one minute, torturing and killing happily to "stay safe". But the advantage in temporary security turns millions of people against the occupiers, and the war is lost. Terrorists are always trying to find ways to enhance the "gridlock" effect against the occupying forces.

Two thousand years ago, a man appeared on Earth with the solution to gridlock. "Do unto others as you would have them do unto you". "love your neighbour and your enemy" and "let he who is without sin cast the first stone." Instead of listening to him, he was crucified by the very people who two thousand years later would invent gridlock and laissez faire capitalism.

One day, maybe all people will understand how their own innocent (but self serving) actions sometimes start a chain reaction that comes back to bite them in the rear end.

Pictures: A diagram of gridlock from Wikipedia, and a gridlocked traffic circle.
Copyright the Lost Motorcyclist