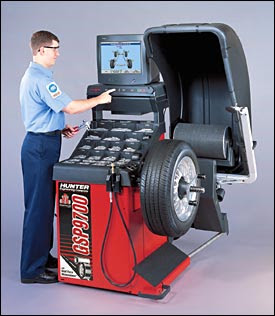 This is a "seat of the pants" review of the Michelin Primacy MXV4 tires on a 2005 Toyota Matrix. What is seat of the pants? It is a subjective and non-scientific evaluation of tires, based on my memory of my previous tires. Unlike the Tire Rack, which measures, times, and gives test results in bar graphs, as well as words. I go by feel and memory, which is nowhere near as accurate. For accuracy, go here: or Here

To understand why I went to the Toyota dealer for my tires, I will go over my first tire purchase in 1973. It was at the newly opened Canadian Tire Store, in Sept Iles Quebec. I just started a new job and finally had money to replace the bald tires on my '56 Chevy. So I got a set of four, which I don't remember the price, but as I recall it was roughly double the price of the car, so make it about $120. When I got home, two of the tires were almost flat, so I pumped them up and went back to get them remounted. Next I noticed that there was enough lead to make a small bust of Lenin attached as weights to each tire. So apparently these tires were not constructed on the "precision" factory moulds.

Now fast forward to 2010. I have never been back to Canadian Tire since 1973 for tires. I only go to Canadian Tire for things that I know will never need to be returned after testing at home. For example, not tires, not telephones, yes placemats, yes oven mitts, yes 10W-40 oil. Come to think of it I did return a set of defective placemats once, so I now check everything very carefully before leaving the store.

I went to the Toyota service department, which, at least at Heffner Toyota (I don't know about the rest), is a welcoming friendly place, from the automatic garage door openers, to the bright cheerful reception area where they get your information, and give you a card for a free coffee and cookie at the in-house cafe (which also has Internet hookup and computers). I got four tires, plus the official Clean Air inspection and a transmission oil change. It was nearly a thousand dollars all together, but the tires are still holding air, and the car got a perfect Clean Air report card (Zero PPM of everything listed, including Carbon Monoxide, so anyone contemplating suicide by sucking on a car exhaust should not buy a Toyota Matrix.) But with these tires being almost twenty times the price of my first car, I expect perfection plus a cup of coffee.

These are my impressions of the tires after a day or two. I can most easily compare them to my Michelin Pilot Alpin winter tires. These new tires definitely sound quieter. Surprisingly, my winter tires were no more noisy than the original equipment tires, which were Goodyear RSA.

With the MXV4 tires, and even the Alpin winter tires, the Matrix hardly wanders at all on a straight road and it takes very little steering input to get it back on course.  But when I first bought the Toyota five years ago, driving on the stock Goodyear RSA tires made me wonder if there was something wrong with the steering, as it took frequent forceful corrections to keep it going straight. I initially placed the blame on the car itself, as one person wrote "Don't expect to drive a Toyota with one hand". I also thought it may be just in comparison to my previous car, a 92 Honda Civic which had extremely light and direct steering, like a go-kart. But then another friend of mine bought a new Matrix the same year, and he told me the only thing he didn't like was the steering. He wanted to take the car back to the dealer to fix it. Coincidence?

About half of a car's driving feel depends on the quality of the tires. Maybe not so surprising given that all the feel of the road has to go through the tires to reach the car.

Some interesting things about the tire. It has two steel belts, not one.  I guess a lot of tires are starting to do this. And it has Michelin's "Green X" mark on the sidewall, meaning low rolling resistance. Most of the Primacy sizes do not have the Green X stamp.  The tire is available in H rated (210 kph) or V (240 kph). I chose H, as the V rated is stiffer and less comfortable (I'm told), and because the original tires were H rated.  Besides, I don't even know if the Matrix can do 240 kph. The tires took small weights to balance it (which is better than big honkin lead weights.) The MXV4's were just a few dollars more than the Michelin Hydroedge, my second choice, but the Hydroedge were not available in H or V ratings.  They were only available in a lower speed rating.

The Primacy MXV4 is NOT a directional tire. My winter tires (Pilot Alpin) and my second choice Michelin Hydroedge are directional tires. Directional tires can not be mounted rotating in either direction. In other words they have to stay on the same side of the car when you decide to rotate the tires.

I am very happy get rid of the stock Goodyear RSA tires. But despite scathing reviews by owners in Tirerack.com, the RSA tires have held up well for at least 80,000 km, and I did get used to driving with them, and had no annoyances other than once fishtailing on a wet corner, and needing to buy a set of winter tires. When I got rid of them, they were still almost perfectly in balance, and they had worn quite evenly almost down to the wear bars.

Picture: Typical modern computer operated wheel balancing machine, I remember Heffners looks something like this from the shop tour I was given back in 2005. Heffners is almost 50 years old, and is now one of the largest Toyota Dealers in Canada. I guess one of the oldest too, because that's about when Toyota started selling in North America.
Copyright the Lost Motorcyclist