The War on Terror is Really About Cults 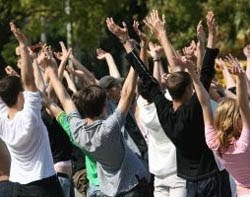 The "War on Terror" is not going as well as it could, and we really need to rethink our basic assumptions about it. By basic assumptions, I mean we need to question what is the essence of terrorism, and if we know what it is, then can we come up with an effective method to fight it?

We could think of terrorism as a criminal activity, or a cult activity, or we could think of it as a clash of civilizations. Each one would require a slightly different approach, and maybe terrorism is a broad enough concept to have elements of all three. But the approach we seem to have committed to most strongly is treating it as a clash of civilizations. Therefore we are fighting two wars using modern military technology against guerrillas (terrorists, freedom fighters, militant Islamists). This technique seems to be a self reinforcing diagnosis, and the more we treat it as a war, the more it becomes a war. And as I said, this is not working too well.

We could treat terrorism as a crime, but we do not seem to have the international system of justice and enforcement to bring it totally under control. So that seems unsatisfactory also.

We rarely try to treat it as a cult activity. A cult is a group that makes members psychologically dependent on it, and controls their behaviour this way. I suspect that a large part of terrorism has cultish aspects. Although we often blame the Islamic religion, the truth is that these are cults within Islam. A cult does not have any true religion. A cult adopts whatever religion is handy. We have many thousands of cults or near-cults in North America, and many of them use the name of Jesus. Back in the sixties, it seemed cults had a lot of success with eastern religions, and so many of them went with Hare Krishna or some other faddish religion. In the middle East, these cults go with Allah, because the usual way for cults to work is to start off with a popular local religion and simply use the local God as one tool in their bag of mind control tricks.

The reason we don't want to face the reality of cults is that so many North Americans are in cults, and they do not want the light of reason to be shone too brightly on their activities. Many of these cults are benign, and don't disobey the law in any way, although some are violent and perform terrorist acts. But even law abiding cults still cause grief to families who lose members to them. Deprogramming is an effective technique to use against cults, and many cults have been weakened, as their followers have been rescued through these techniques.

Take for example Omar Khadr, a story that has elements of all three. He was rounded up using a war, with bombers, and soldiers killing most of his cult-like party. He was tortured during interrogation, and I don't even know whether that activity falls under war, justice, or some sort of medieval throw back to the dark ages or the inquisition. Then he was put on a show trial, with some elements of a legal system, however flawed that might be. As a result, he will spend the next year in solitary confinement, after which he may be eligible for release in Canada. All of these things are unsatisfactory to some degree.

If we had recognized the cultish aspect of terrorism, we could have used deprogramming from the start. Instead we seem to be increasingly blaming the Islamic religion.

Many cult like churches in the USA, have an agenda that includes a broad based struggle against deprogramming, so this was never tried in our "War on Terror". The cultish Christians also have a belief in the end of the world, and the superiority of Jesus over Allah, and as a result find a holy war not only acceptable, but pre-ordained by God. Of course they are going to suppress any talk of terrorism being nothing more than another form of cult activity, which happens to borrow its rhetoric from the Koran instead of the Christian Bible. (And in case you are wondering, the Bible has plenty of quotes to support any kind of evil activity if you twist the words enough) For example, Elizabeth Smart's kidnappers were Jesus based cultists who used the bible to justify kidnapping and rape.

Americans do not really need the cults to fight a war on terror, as they have the military. But some people in the middle East have discovered the use of cults as a serious weapon in their fight against the USA or even the USSR.