Why It's Hard to Keep Motorcycles Clean 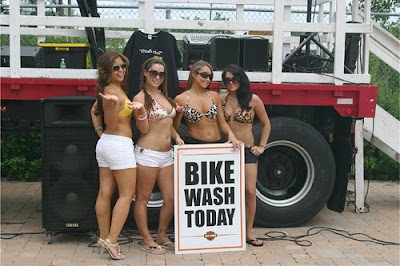 I don't mind having a clean motorcycle, but it's hard to for me keep dirt and bikes apart. I'm not one of those "rat bike owners", who consider dirt and rust on their bikes to be badges of honour. Some rat bike owners even persuade seagulls to take a dump on their gas tank, then clear coat over the bird droppings to preserve them from being washed away by rain. I would never do that. I actually like a clean bike. I am envious of people with clean bikes.

On the other hand there are bikers who are "clean freaks". I can remember once on a motorcycle trip stopping to wait for a ferry crossing. It was raining so my bike was dirty. The owner of the motorcycle in front of me decided to while away the time, waiting for the ferry, by washing his bike. I know that "Cleanliness is next to Godliness", but I don't want to be near God that bad.

When I bought my very first bike, I didn't even make it home before the bike was a mess. I had to ride over 60 km of gravel road, which even in Canada would get the bike dirty. But this was laterite gravel, common in Africa. It is a reddish rock whose powder gets into everything. It is mostly iron oxide, so I assume it is somewhat magnetic, because it seems to stick to everything metal.

When I do wash my bike, I always get a strong desire to jump on the clean bike and go for a ride. As soon as I am on my bike, I somehow get in a rain storm. Even if there is no rain, I will find wet roads. The wet roads can be from a previous rain storm. Or the can be from a broken water main. Or they can be from a person emptying their pool onto the road. Once, on a clean bike of course, I even got hit with wet cement as I passed under an overpass where some workers were fixing up the bridge and got sloppy.

Wet roads and cement are not my only problems. In the summer, bugs thwart my plans for a clean bike. Sometimes I drive through what can only be described as a bug storm. Bugs thick enough to obstruct the view though my visor. At least we don't have locust storms like they do out west, where bugs are so thick on the road that you can slide and crash.

Once I came across an irresistible set of circumstances that made me really keen to wash my bike. I had ridden it down to Florida, and one of the local bikers remarked that my bike was covered with bug guts. Of course, I thought. That's because nobody thinks to tell the bugs to stay off the road when traffic is coming through. But he continued to say that many of the bugs in Florida have acidic guts that, if left on the bike, will eat into the paint or chrome. That got me worried, so a couple of days later when I had set up camp, I happened to come across a bikini car wash, and suddenly I remembered the bike needed wash. So seeing that the girls were idle at the time, I turned in. But then the manager, whose name was Mr. Buzzkill came along and told me "We don't wash bikes." "Why not", I said. "I'll pay the same as a car." "Liability." said the manager, as if that one word was enough to explain everything you could ever think of.

Nowadays, whenever I get the urge to wash my bike, I end up with doing twice the work. That's because Mary Ann has her own bike, and whenever she sees me out in the driveway with a bucket and hose, she comes out to see if she can get me to wash her bike too. She does not like washing bikes. But she likes (a) having a clean bike and (b) riding on the dirtiest, crappiest roads you can think of, while raining if at all possible.

I continue to occasionally wash my bike, but without the idea of showing off a clean bike to my friends. Mostly, I clean it because it's a good way to spot things that are wrong with it. I sometimes see loose spokes, leaky oil seals, missing bolts and the like. And sometimes I want to get nasty dirt off, like the salt spray that sometimes happens in the spring, and is very corrosive. 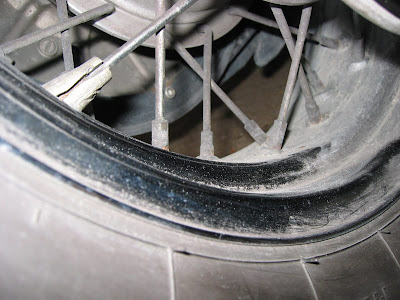 My new bike, the Kawasaki Vulcan, has no centre stand, so I have quite a difficult time cleaning the wheels. With the centre stand, you can spin the back wheel, but on this bike I have to roll the whole thing forward and back. This increases the time it takes for the bike cleaning so much that I often just leave the back wheel dirty. Anyways it's mostly covered by the saddlebags so unless I just ran over you on the road you are probably not going to notice, and you likely won't care anyway. The other problem with the Vulcan is that it does not have an oily chain. While the oil on the chain makes a real mess, it does help preserve the metal from rust. I'm noticing that a bit of rust is already forming on my spokes and rim on this bike.

The other picture, my back spokes, was taken yesterday. Not an especially flattering picture of the bike. I especially don't like washing the bike when it's really cold out. But then as soon as it gets warm, I want to go for a ride.
Copyright the Lost Motorcyclist