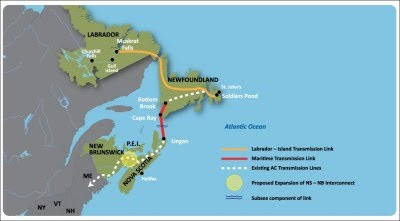 Yesterday a new project was started up by Newfoundland, to develop an electric power corridor, and to build a new power station in Labrador. The plan is to take the route to Newfoundland (the island) first, and supply power to it's own citizens, and then cross the Gulf of St. Lawrence to Cape Breton, Nova Scotia, and carry on to New Brunswick and the USA.


Much of this deal is the result of an ongoing battle between Quebec and Newfoundland over power transmission routes. It is no secret that Danny Williams, Premier of Newfoundland, is angry at how much money Quebec is charging for the transmission of power through their province. And obviously, this new route is chosen because it is an "all English" route skirting the Province of Quebec.

On the whole, it may be a good project, but because of the hot tempered Danny Williams, I would be concerned about whether it is more of an ego driven fiasco (and not the first time for Danny, either), or a logical approach to energy development.

My first observation is that this is going to cost a huge amount of money. With a bit of cooperation, a route through Quebec would have been less expensive, and use proven technologies. However, Danny says Quebec refuses to allow Newfoundland power to pass through their territory.

A quote from the news story in the Halifax Herald

And they quoted Danny as saying

"The people at Hydro-Quebec and/or people who were involved in decision-making there didn’t really want to do a fair partnership with us, ... We have embraced Emera, embraced the government of Nova Scotia. . . . Quebec are the losers."

Another quote from Reuters

"Hydro Quebec has refused to transmit power from the Lower Churchill to markets in the United States, saying it requires all the available capacity for its own projects."

Next, Danny Williams is appealing to the Federal Government for funds to help cover the costs of bypassing Quebec. Of course, Quebec, being part of Canada is objecting to this subsidy against themselves.

It is just anti Quebec rhetoric to say that Quebec "would not allow access" for Newfoundland's electricity to pass through its territory. Quebec is currently carrying Newfoundland power, and has been doing so for years. The question is not about allowing the electricity to go through, it is about how the much Newfoundland is willing to pay to upgrade the existing corridor to carry a large amount of extra power.

The anti-Hydro Quebec argument is that it does not cost much money to build, maintain, or upgrade a long distance power transmission corridor. Newfoundlanders downplay the distance and the cost, and the technical difficulties in transmitting power. To Newfoundlanders, apparently generation of power is the big thing, and the transmission is trivial. It's like having a diesel generator in your back yard, and running an extension cord to your house, where generation will be 99% of the cost, transmission is 1%. But the reality is that in remote projects, transmission is a very large part of the cost. Put that diesel generator in Labrador, and now figure out how much it is going to cost to run a 2500 km extension cord to your house. And that is the short way, through Quebec. Now figure out how much extra it is going to cost to run it under the ocean for 180 km. in addition to the extra thousand or so kilometers above and beyond the distance through Quebec.

Here is the breakdown (from the Chronicle Herald again) estimated costs.

It's significant to me that the cost for above ground transmission lines is is not itemized in the Herald article. Once again making my point that this project is more about spite than about making money. Well, if the total cost is 6.2 billion, I can do the math. The missing part is $2 billion.

If Newfoundland indeed goes ahead with this, good luck, and somewhere in the future I hope this is going to pay off for them. They will certainly get an education about the true cost of power transmission.