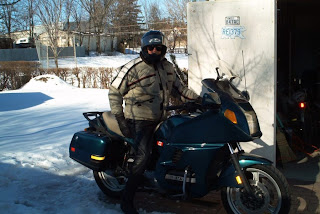 Nineteen years ago, BMW brought out the K1100LT motorcycle with a laid-down, inline, four cylinder motor, with four valve heads. The bike had technical innovations such as anti-lock braking, anti-squat drive shaft, floating disk brakes, heated handgrips and electrically adjustable windshield. The motorcycle retailed for a very high $17,000 here in Canada. But that was the perfect bike for me at the time, so I got one. It took many years before any serious competition came along to at least share with the K1100LT a "state of the art" comparison. But nobody was doing better. I owned a '92 K1100LT for 15 years. Although I have not ridden the new K1600GT, a test drive would hardly be necessary to declare it a winner over the 1992 machine.

There have been some challengers since 1992, and this is only the opinion of "The Lost Motorcyclist" (me), but they were all either too heavy, or didn't really attempt the outdo the K1100LT except in horsepower. I don't really need a lot more than 100 horsepower in a bike, so that didn't impress me too much. I also don't need a lot more than 750 pounds of motorcycle. For the rest of the competition, it has been pretty much a toss up as the other makers tried to match BMW's features and performance.

Even BMW fell short of the mark, and they had three bikes that sort of replaced the discontinued K1100LT. First was the R1200RT, which was only a two cylinder and was not even liquid cooled. Next, the K1200GT, which was still a four cylinder bike and still did not have a counter balancer to get rid of vibrations - and that was my main beef with the 1992 K1100LT. And last but not least was the K1200LT whale at over 850 lbs.

But now the K1600GTL finally surpasses the K1100LT in every way. It has more power, although this is not a big issue with me. But it has an inline six cylinder motor, which I consider to be a significant step forward, and also eliminates the need for a counter balance shaft. It has on-the-fly adjustable suspension tuning, another unique and desirable feature. From there it has a slew of other features that may or may not be important, and would need to be examined one by one, and some are not even part of the standard package. But most important to me, to prevent disqualification, BMW has kept the weight down so the bike is manageable, and much lighter than a Gold Wing or the BMW K1200LT.

I have not put in an order for the BMW K1600GTL, because my priorities have changed over the years. This specialized and expensive bike appeals to a fairly demanding buyer. I might have been like that twenty years ago, but now I actually prefer a less expensive Japanese built bike. I don't need the adjustable windshield any more, or the long distance high speed capabilities, either on the freeway or in the mountains. A few years ago, I got a 2007 Kawasaki Vulcan 900 Classic LT, which has more than enough touring capacity for my current needs and should help keep me out of trouble with the law. The Kawasaki also has a local dealer, and anyway, has not been taken back to the dealer's shop for anything in four years. To be fair, I ignored one recall notice, got tires changed at an independent local shop, and I have also ignored a few maintenance items, and I don't worry that the fuel needle is stuck on zero. All those I probably would have taken to the dealer if I had a BMW. And probably a lot more, judging from comments on the BMW owners' forums.

It seems that the reviews coming in from motorcycle magazines (like Cycle World June 2011) are confirming that this is the new top bike of the touring/"sport touring" class. The only surprise for me is how long it took to get there. And that it was BMW who finally decided to produce a transverse inline six, not Honda or Kawasaki.

Picture: That's me going out for a winter (spring) ride many years ago on the K1100LT.
Copyright the Lost Motorcyclist