"One Week" on DVD (Compared to "Easy Rider") 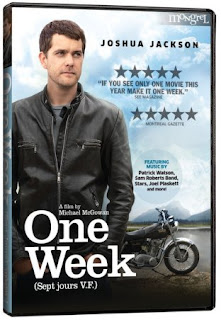 I finally found the DVD movie "One Week" at the video store for as reasonable price ($6), so I'm going to go over that trans-Canada motorcycle trip again.

Unlike "Brokeback Mountain", "Land of the Lost", "Get Smart" and "World's Fastest Indian", this movie does not have men kissing each other. But on the other hand, being a Canadian movie, we can see the Jesus on a crucifix giving us the finger. Apparently Canadians like movies that are Godless but not too gay.

I ("The Lost Motorcyclist") also recently acquired an "Easy Rider" DVD, and I have made some comparisons between the 40+ year old American movie "Easy Rider" and the Canadian "One Week". You could call "One Week" an updated Easy Rider made for Canadians and apparently nobody else.

While Easy Rider features two American Harley Davidson motorcycles, One Week features a British Norton Commando. Makes sense because we don't have a Canadian motorcycle, but many of us think we are British. Easy Rider works the US flag into the paint jobs on the helmet and the gas tank, while the Norton remains plain black and so does the rider's helmet. The Canadian movie hero is a normal person, who blends into his surroundings, while the Easy Riders contrast starkly from the people they visit.

Both movies end in death and the destruction of the motorcycles, but in the Canadian movie is is natural or accidental, respectively. Both movies involve dope, although Easy Rider goes much further with the drugs which is natural, being America of the sixties. Should be easy to guess which movie has guns (Hint: country name starts with U and ends with SA). One Week had a lot of animals featured prominently in it: The dead dog, the dead skunk in the road, the live dog on the trail, and horses to ride.

Easy Rider's soundtrack is a compilation of popular hit parade songs, "One Week"'s is made up of obscure Canadian folk or pop. 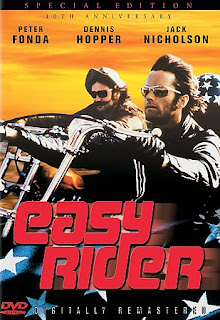 Both movies feature unrealistic bikes and gear, assuming they were supposedly used for the long haul. The Norton was probably much better for riding than the chopper Harleys, but not as good as most others in the year 2008, and it was not even suitably equipped with a windshield for the cold time of year this was filmed. In a nod to realism, twice during the movie the Norton was shown to be requiring mechanical attention. Although "bad gas" would not have been in the top 100 most likely causes for a Norton to break down.

Both movies end with a bit of a verdict on their country. Easy Rider with the puzzling "We blew it". One Week with the German tourist saying "You haff one of the most beautiful countries in the vorld".

The makers of One Week must have realized a profound truth about Canadian scenery. It looks better if you shoot it out of order. Shown in the order you come to it, Canadian scenery is fatiguing. But put a little Ontario, then a shot of Saskatchewan, then a bit more Ontario, and then some Alberta, and keep mixing it up, and it is quite exciting. In a similar way, I would probably also enjoy the Canadian climate more if every other month was warm.

A part of One Week I kept noticing, because it was so different from my own motorcycle trips was the constant cell phone usage to call home. When I went on long trips, I had no cell phone, and often no way to call home at all, and I never thought about it. Same with Easy Rider, mainly because it predates cell phones. One thing I assumed was a basic part of long rides was the feeling of getting away to a new place, but I wonder if that feeling goes away as you keep chatting with friends and family back home.

Of all the songs to feature in the movie, the strangest choice in my mind is "Un Canadien Errant", the sad tale of Canadians banished from their homeland, which was sung in the original French. Or maybe it is somewhat fitting for the sadness of the terminal illness in the main character.