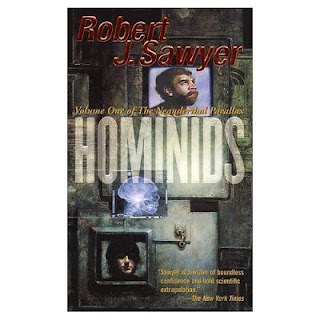 Robert Sawyer is a Canadian science fiction write and despite his having written 21 books, I never heard of him before.  And I thought I liked science fiction books.  Most amazingly, I had to find out about him through Mary Ann. She, who dislikes science fiction, was in the middle of reading this book when I found it on the table.  Somehow I lost Mary Ann's place marker in my rush to finish the book.  She chose it because it was the Waterloo selection for "One Book One Community" for 2005.

I won't get into the plot of the book, so this review will not contain any spoilers.  There is a comparison between the world we live in, where Neanderthals are extinct, and a parallel universe where Neanderthals became the only sentient species, and Homo Sapiens went extinct instead.  It seems to me that Sawyer comes up with a lot of ideas about how Neanderthal civilization might have evolved, based on his research, or his knowledge of our own history and science.  For example, he writes that if humans had not been warlike, we might never have reached the moon, as those rockets were originally invented as a weapon of war.  How would technology evolve if we did not use fossil fuels?  These are all interesting questions from a scientific viewpoint. Additionally, Robert Sawyer tackles religion and philosophy.  How would a society evolve that did not believe in a father-figure God who punishes and rewards us in the afterlife?

There was one topic in the book, that was particularly timely, about surveillance.  In the Neanderthal world, everyone's actions are recorded all the time by implanted devices.  There is no privacy, but hardly any crime either.  This topic foreshadows the current 2013 scandal where we find out that the NSA is recording all kinds of phone calls and emails.  Similarly to what happened in "Hominids", NSA is not necessarily looking or listening to all these recorded messages, but in case of a crime, can go back to see what happened.

In the political climate of today, Robert Sawyer comes off as extremely left wing liberal. This book will insult many conservative readers,  who have tired of hearing about everything that is wrong with our warlike, environment destroying species.  In fact the book already has insulted many, judging from comments on this website.


To me (the Lost Motorcyclist), who is now officially a 60's liberal, "Hominids" reads like a science fiction story from the fifties, except with bit more sex, as censorship has loosened over the years.  In other words, the book's philosophical underpinning is science, reason, peace and tolerance.  I have this feeling that some of modern science fiction has been replaced by religious, magical, and warlike fantasies posing as science fiction.

The change from old style science fiction to magical war fantasies may have been started with the very successful movie "Star Wars".  The title tells you about all you need to know about the pacifism in this movie, and then "May the force be with you" tells you what you need to know about the attitude toward miracles and magic.  Star Wars had very little in the way of real science.  It was more like a typical war movie, only this time set in space.  As the space ships passed by, they made quite a bit of noise even though they were in a total vacuum.  Sorry, Star Wars fans, but there is no noise in space.  Little errors like this generally disqualify a movie from being real science fiction. Actually they are probably not even errors as much as a clear sign from the director that this movie is not intended for real science fiction fans.

"Hominids" took me back to an interesting time where real science fiction was better appreciated, in a world where science itself was respected, and evolution was taken for granted.  A time before the right wing backlash against science had begun its last ditch effort to take us back to the dark ages of superstition and witchcraft.

And so, just as much as the conservatives are tired about hearing what's wrong with religion, pollution, and exterminating species; I am also tired of arguments as to why we need to use up all the Earth's resources as fast as possible.  So to me this book was a comfortable read.
Copyright the Lost Motorcyclist