Bike Fever and the BMW K1600GT 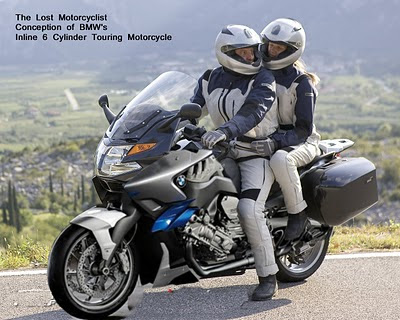 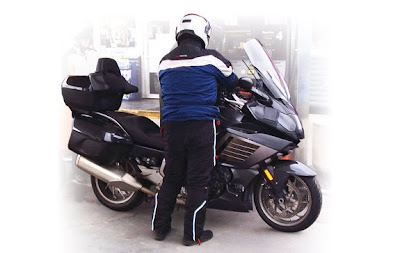 As the summer turns to winter, bike fever strikes unexpectedly. Yesterday, at our Tim Horton's weekly meeting it was discovered that one of our members had been diagnosed with a relatively severe strain of this infection: The VTX bug. He had put down $500 on a Honda VTX1800N. He was nearing retirement and had not ridden a bike in many years. The last time he had ridden a bike, the standard procedure when followed by flashing police lights was to nail the throttle and drive off as fast as possible on a 1971 Kawasaki 400. I tried to explain that we older people do not do this any more, and so the 1800 cc may be overkill.

No sooner had I finished Googling Honda VTX1800, than I came across an update on the new BMW 6 cylinder sport touring bike, the K1600GT and K1600GTL. Last year, I twice wrote my own opinions on this development, and even photoshopped my idea of a suitable design for BMW to copy free of charge.

Unfortunately, in this photo, the most interesting part of the design is hidden by the Michelin Man. But otherwise it looks pretty much as I had photoshopped it, so congratulations to BMW and of course I will honour my promise to not sue for copyright infringement.

Another new invention has been announced for the BMW K1600GT, the adaptive headlight. Not only does this headlight maintain a level beam regardless of bumps in the road or passenger loading, it also solves another major problem with motorcycle headlights. It can see around curves in the road, where ordinary motorcycles are at a huge disadvantage compared to cars. When a motorcycle leans over in a curve, using low beams plunges the road ahead in darkness. All you can do is put on the high beams, or slow down so that you are not leaning over very far. We don't do this much here, but in Europe, motorcyclists like to drive at steep lean angles at night on curving roads. So BMW has come up with a solution.

It seems BMW often leads the way in motorcycle design. Possibly it is because they are based in Europe, where drivers are far more demanding of their motorcycles than North America. Over here it seems like the criteria for motorcycles are that they be big and "made in the USA". And if they are not "Made in USA", they better be real cheap.

BMW, in the last twenty years has come up with some startlingly useful innovations. An electric windshield that really works, and has been copied by almost all makers. ABS and adjustable suspension stiffness are other examples. BMW also designed a handlebar that adjusts between two useful positions. I know that other bikes have had adjustable bars for years, but those bars only adjusted a little to allow for your size. The BMW bars adjust to several useful positions for one rider, from fast sporty to slow touring.

So obviously, from my delirious rantings, the VTX bug is not the only fever around. I am putting pennies in the jar near my computer, nervously waiting to find out what BMW means by "K1600GTL, $:TBA"