Canada's Position in the United Nations 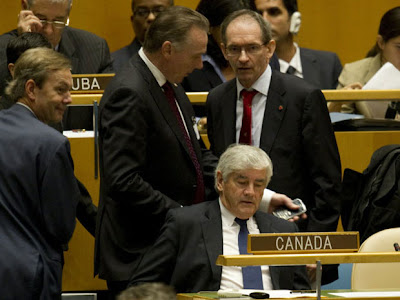 Canada, for the first time, lost a bid for a temporary seat on the U.N. Security Council. In my mind, the reason is pretty obvious. We have a pro-war, anti-environmental government that has lost international good will by being more pro-Israeli than the U.S.A., and has no more respect for the UN than the Bush regime.

But I was surprised to find out that our Prime Minister, Harper, was blaming the Liberal opposition leader Michael Ignatieff for the embarrassment. Where can I get an explanation of the view from the right wing conservatives? I decided the "National Post" would be good. Here is the first one I found.

Right in the title, it's the Canadian Arabs to blame. Apparently they cast their vote against us. I wonder how that's possible, as they don't even have official recognition as a country. I understand that this is just "exaggeration" on the part of some opinionated columnist. But not everybody understands, like me, that this is impossible. It's typical for The National Post to put misleading headlines, spreading conservative ideas among people who do not read the whole article to make up their own minds.

The first thing I read in the column is that there was no actual vote, Canada actually withdrew from the final ballot. I guess the conservatives didn't want to be embarrassed, and figured they were going to lose anyway.

Even this writer admitted that Ignatieff's statements did not lose us the seat:

"..the UN may be hopeless, but it doesn’t take its cue from the Liberal Party of Canada"

Notice the statement "the UN may be hopeless" in the quote, almost like this opinion about the UN does not need to be debated. Conservatives apparently think it is now an established scientific fact that the UN is hopeless.

Hopeless means 1. having or offering no hope 2. impossible to analyse or solve 3. unable to learn, function, etc. 4. Informal without skill or ability

When you say "the UN may be hopeless, but..", you are not open to a rebuttal (Reminder, the Queen of England last summer visited the UN and said it was an institution of hope). If this person had said "I believe that the UN is without hope." it would at least imply a willingness to recognize that this is a personal opinion.

With this kind of attitude and these speech patterns, which I believe are representative of the conservative mindset, would you not expect Canada's conservative government to bow out before the final ballot?

Here is what this conservative commentator thinks lost us the seat:

"...not signing away our economy to appease the greenies cannot be tolerated. How dare we be so right-wing and, like, totally American. Ugh. How can the UN even look at us? Please, guys, don’t vote for us. Pro-Israel, pro-free-trade Westerners have no place in the United Nations until they grovel and apologize for every sin, real or imagined, ever committed by a white guy anywhere."

So apparently it's also the greenies and the anti-white guys who share some of the blame. That's what I thought too, but worded differently.

The real problem is that Canada deserves a seat on the UNSC, but not until we get a government that represents the Canadian people. Today, Canada has an extreme right wing, pro-war, pro-Republican, anti environmental, and religious fundamentalist governing party that has grabbed on and held power through our flawed electoral system, and our equally flawed checks and balances (one word "prorogation"). And until we get our government back, we should not be taking up space on the UN Security Council. Let Portugal have the seat. They represent Canadian opinion as well as the Conservative Party of Canada does.
Copyright the Lost Motorcyclist